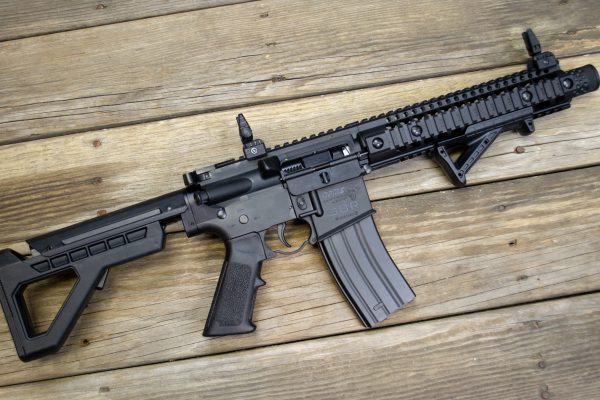 Yes, you read that right. The new Crosman DPMS SBR Airgun offers full-auto operation. Or you can be all technical about things and refer to it as a “select fire” rifle. Yes, this package of pure BB fun has a safety selector switch just like those on modern sporting rifles, but with one very significant difference. There’s a “safe” position. And a “fire” position that enables a single shot with each press of the trigger. That’s all normal and expected. The third position, full-auto, is what you most definitely will not find on civilian semi-automatic rifles of the AR-family variety. That function is reserved for military and law enforcement purchase only. However, we’re talking airguns with no such restrictions, so you can get this one delivered right to your house.

As the name implies, this little gem is modeled after a DPMS SBR (short barrel rifle), and it looks and acts like the fire and brimstone version. If you look at the muzzle, you’ll see a faux suppressor embedded into the hand guard, giving a nod to an integrally suppressed centerfire SBR. All of the expected functions are there – a six-position adjustable stock, pistol grip, and handguard with Picatinny rail segments on all four sides for mounting of accessories like lights and lasers. You’ll even find an angled forward grip as is now in vogue on many “tactical” rifles.

The DPMS SBR comes with flip-up iron (polymer actually) sights. The front sight doesn’t move, but the rear sight is adjustable for windage, or side to side if you will. If you look at the rear sight aperture carefully, you’ll see that it’s actually two posts mashed together. The rear one folds back to expose a larger aperture hole. For faster targeting, use the large aperture. For more precise shots, use the smaller.

The rifle itself feels legit, even though it’s made from glass-filled polymer. Total weight is just over six pounds although a chunk of that resides in the magazine assembly.

While just about everything on the Crosman DPMS SBR looks and acts like a centerfire modern sporting rifle, you will notice that the magazines won’t drop free on their own. I can’t speak for the design decision, but to me, this is a feature, not an oversight. Remember that the magazine contains not only the BB reservoir but the two CO2 cylinders. You don’t want that component to be falling out and banging around on hard surfaces. I suspect it would start leaking gas like one of those Chick-Fil-A cows after a few drops. So, this is a good thing and an intentional design decision if I had to guess.

The Crosman DPMS SBR airgun is a CO2-powered rifle, accepting standard 12-gram cylinders. They’re inexpensive and easy to find. That’s a good thing as you’ll use a lot of them. Not because the rifle is inefficient, but because you’ll want to shoot it – a lot.

The DPMS SBR runs on two CO2 cartridges, both of which fit into the magazine itself. When you pop the cover off the magazine, you’ll find two cylinder slots, and an included Allen wrench for installation and removal. Do pay attention to the printed “first” instruction on the left-hand cylinder housing. If you pierce the wrong one first, the gas will leak out. If you do it right, everyone and everything is happy, and you can insert and remove the magazine at will without losing CO2. That’s important because you also load the BBs in the magazine itself, so you’ll need to remove the magazine before the gas runs out. I’ve been getting six or seven magazines per CO2 refresh when shooting in full auto mode.

The DPMS SBR holds 25 BBs at a time, right along the leading edge of the magazine. A spring-tensioned follower slides down, exposing a feed hole. It’s not hard to drop the BBs in by hand, but Crosman includes a speedloader which makes things easier. It’s not perfect, but once you get the hang of it, the loading process is greatly accelerated.

This rifle has a reciprocating action, so you’ll feel the joy of its fully-automatic operation. The charging handle retracts the bolt just like the real thing and the bolt release button on the left side of the receiver lets it fly forward. As you fire, the bolt slides back and forth, creating a legitimate recoil sensation. Yes, it’s fun.

The box says this bad boy flings BBs at the rate of 1,400 rounds per minute. I happen to have a shot timer sitting on my desk, so I figured I’d do a little experiment and see how long it takes to dump a 25-round full magazine. A shot timer works by listening for the noise and marking the time each time it hears a “bang.” The last “bang” mark represents the total elapsed time from the buzzer to the last shot leaving the barrel. From previous experience, I know it takes about a quarter of a second for the brain to hear the beep, formulate marching orders, and deliver the message to the muscles in the trigger finger. In fact, when I looked at the results, the elapsed time from the beep until the timer heard the first BB leave the barrel averaged just over .20 seconds. So, to get the actual rate of fire, we had to subtract the time from the beep to the first shot. After that adjustment, here’s how the “full magazine dump” times worked out.

Hang on to your shorts, it’s math time! To figure out the cyclic rate per minute, we just need to divide the number of shots by elapsed time. That comes out to 19.68 BBs per second. Now we multiply that by 60 seconds per minute and get… 1,181 rounds per minute.

Let’s compare that rate of fire to some famous centerfire full-auto guns.

The factory rating of 1,400 rounds per minute is certainly possible based on my observations. The numbers that I recorded were a bit inexact because the rate of fire of the DPMS SBR BB Rifle exceeded the capabilities of my shot timer. The timer picked up about every other shot on average, recording 12 or 13 individual shots per string out the 25.

The Crosman DPMS SBR BB rifle is a hoot to shoot. So far, reliability has been excellent. No jams or stoppages, although if you ever do experience one, you can separate upper and lower receivers, just like a centerfire AR rifle, and get easy access to the chamber and barrel. This rifle is surprisingly affordable with a suggested retail price of $199.99. With a bit of shopping, you should be able to knock up to fifty bucks off that price tag. Go get one.