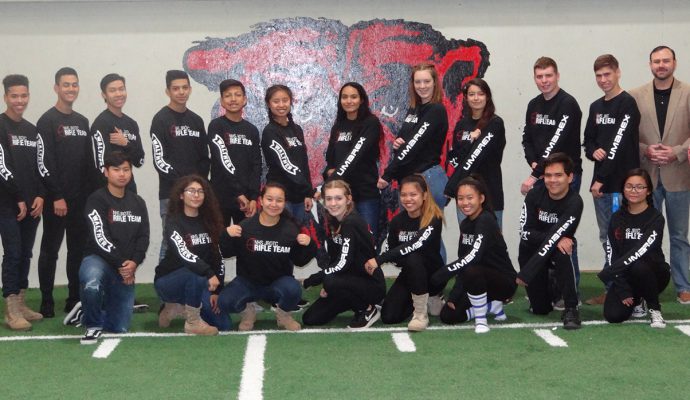 The Fort Smith JROTC team recently made its 19th consecutive appearance at the 2019 Arkansas Junior Olympic 3PAR State Championship hosted by the American Legion.The four members of this year’s Precision team are Jackie Pham, Koi Hampton, Christa Head, and Oneida Ibarra all of Northside High School. The team aggregate score was 2165-68 earning them their 17th win at the match. Jackie Pham was the overall high shooter in the prone and kneeling positions and 1st overall with a score of 560-24. Teammate Koi Hampton was 3rd overall with a score of 542-16.

The four members of the Sporter team were Jaylin Do, Tina Tran, Janet Phommaha, and Alaysia Vongkhamchanh. This team earned their 2nd consecutive victory in this match with an aggregate score of 1964-23. Jaylin Do of Southside High School was 1st in standing and 3rd overall in the match.

The Grizzly Air Rifle Team participated in the Army JROTC Postal Competition for the first time this year and placed 19th with a score of 982-15 in Sporter class and 10th with a score of 1083-29 in Precision class in the Eight State Region of 5th Brigade. The team also participated in the CMP National Air Rifle Postal for the first time where Sporter Class shooter Oneida Ibarra was invited to the Southeast Regional Championships in Anniston, Alabama with a score of 256.6. This match was held April 4-6, 2019.

Umarex USA, Inc, based in Fort Smith, Arkansas, supports their hometown high school Grizzly Rifle Team as part of the Fort Smith Public Schools Partners In Education Program. “We’re honored that the JROTC Air Rifle Team shoots our RWS pellets, wears our Umarex Airguns logo and uses a Walther precision air rifle in competition, but it’s the shooters who put in the discipline and do the work to win matches. They’re the reason we support the team,” said Justin Biddle, Director of Marketing at Umarex USA.