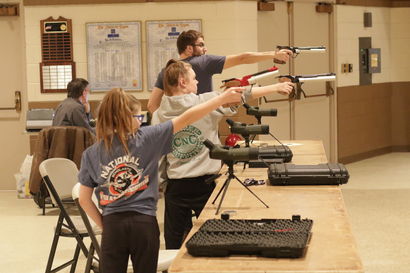 Amber Fink of Traer, a member of the Traer Air Gun (TAG) team, will competing at the Junior Olympic National Championship held in Colorado Springs, CO from April 20-27 in the air gun division after winning the State Championship earlier this season.

“It still hasn’t really processed that this is actually, that I’m actually heading to trials for the junior Olympics,” Fink said. “I’ve been practicing hard with my teammates to get here. It’s a mental thing, remaining calm during the process to shoot accurately.”

Fink qualified with high scores and won the State Championship to advance to the trials in Colorado Springs, competing on Tuesday and Wednesday that week. The 2018 North Tama graduate has come a long way after joining the team her sophomore year of high school as she grew with the club.