You are here: Home / Competition / Eley Sweeps The Shooting Sport Finals At The 2nd European Games 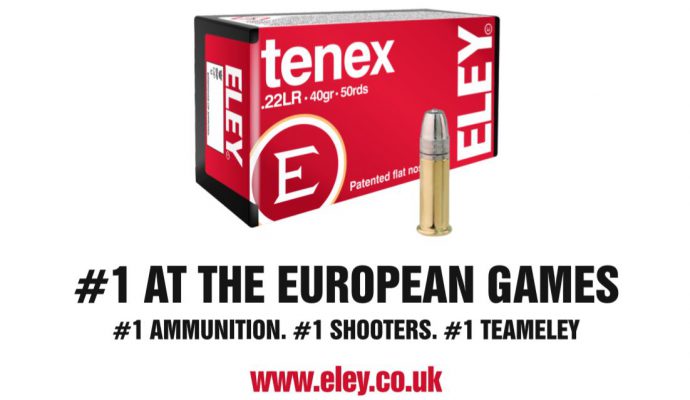 Rifle and pistol shooting made its second consecutive European Games appearance this summer in Minsk, having previously featured on the programme at the first Games in Baku 2015. Kicking off June 22nd, the event hosted a range of mixed team and individual shooting competitions where athletes had the chance to earn quota places for the next Olympic Games.

The first day of the shooting schedule held two events – the Mixed Team 10m air pistol and Mixed Team 10m air rifle. Two events meant two gold and two silver medals for team ELEY. In the air pistol final, current world number one Artem Chernousov and partner Vitalina Batsarashkina used ELEY tenex air to secure first place with 17 points to 9. Speaking of the final Vitalina said: “The European Games is important for us, as we now know the level where we are ahead of the Tokyo Games.”

The Russian duo were pitted against Serbian favourites Zorana Arunovic and Damir Mikec in the final who finished in second.

Day two and attention turned to the individual air pistol events. Artem Chernousov showed no signs of slowing down claiming the gold in the 10m air pistol men’s and setting a brand new European Games Record with a score of 241.4.

For the women’s air pistol, it was a clean sweep for team ELEY. Despite taking time off to recover from an injury, Zorana returned to the stage on top form to clinch the gold medal and set a brand new European Games Record. Following closely in second was Greece’s Anna Korakaki and Bulgaria’s Antoaneta Boneva in third.

Day three and a third medal for Artem Chernousov. This time with girlfriend and fellow ELEY shooter, Margarita Lomova. Together they took first place in the mixed team 50m pistol final without giving the other teams a look in. Third place went to veteran ELEY shooter Nino Salukvadze and her son Tsotne Machavariani.

Next up, the mixed team 50m rifle prone. Nina Christen and Jan Lochbihler’s confidence shone through as the duo secured a well-deserved first place. In the final event, the Swiss team shot a huge score of 209.5 – meaning the average score was 10.4!

All eyes were on the women’s 25m pistol final thanks to a tense shoot-off for the gold and silver medals. But it was Anna Korakaki who came out victorious against Swiss shooter Heidi Gerber Diethelm after scoring three points to Gerber’s two in the final series. Despite qualifying in sixth place, Korakaki’s experience, determination and precision meant she climbed the ranks all the way to first place to take home her second medal of the Games for Greece.

Sergey Kamenskiy added to Russia’s dominating medal count in the men’s 50m 3P rifle final using ELEY tenex. Fresh from his silver medal winning performance in the 10m air discipline, Kamenskiy fought tooth and nail to remain atop the leaderboad and even set a new European Games Record with a final score of 461.6

The European Games are held every four years, with the next planned to take place in 2023 in Krakow, Poland. To find out more, visit www.european-games.org/

For information on ELEY’s medal-winning ammunition or the complete ELEY team, visit https://www.eley.co.uk.