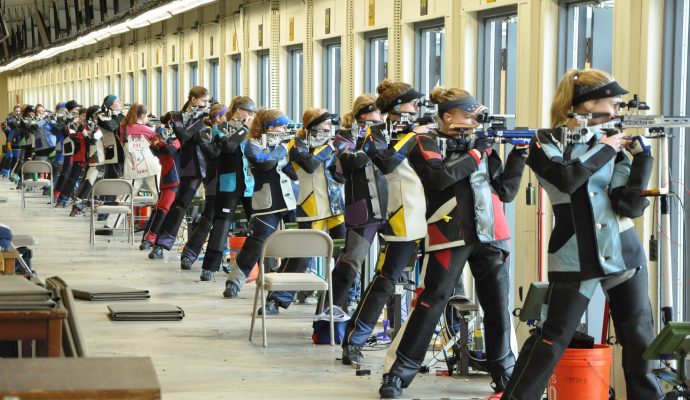 Reigning Olympic gold medalist Ginny Thrasher (Springfield, Virginia) earned World Cup Team status in Air Rifle Thursday and then came back to finish second in Women’s Three-Position Rifle to earn a trip to the Pan Am Games. Pistol shooter Alexis Lagan (Boulder City, Nevada) also earned World Cup status Thursday in Air Pistol and then came back in Sport Pistol Saturday to make sure she was among the lucky few to represent the United States at this summer’s Pan Am Games as well.

While those athletes enjoyed good performances throughout the week, another top smallbore performer included three-time Olympian Keith Sanderson (Colorado Springs, Colorado). His world-class Qualification score of 1183 Saturday helped him easily walk away with top billing and a 19-point margin of victory in Rapid Fired Pistol. The Leverett siblings, Henry and Jack, will be joining him as top-rising juniors on the World Cup circuit, while Henry (Bainbridge, Georgia) will compete alongside him in Lima after finishing second.

Katie Zaun (Buffalo, New York) and Katelyn Abeln (Douglasville, Georgia) join the Leveretts as well as Hunter Battig (Colorado Springs, Colorado) as the rise of junior talent continues to infiltrate the top ranks of America’s Shooting Team.  Zaun finished third behind Beard and Thrasher in Three-Position Rifle, and as a 15-year-old, becomes one of the youngest World Cup members of all time in rifle. Abeln will team with the Leveretts and Battig on the World Cup pistol team after finishing third in Sport Pistol.  Last year, she finished runner-up at the Junior World Championships in this event.