You are here: Home / In the News / Dramatic Footage Released of Whisky Drinking Gunman in Police Shooting Incident 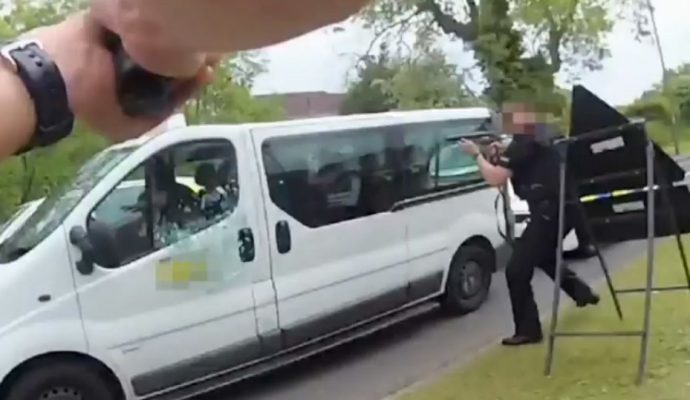 Dramatic video of police shooting a suspect who swigged whisky, crossed himself and raised his weapon at armed officers has been released after he was sentenced to an indefinite hospital order.

Samuel Houlihan, 25, was described in court as “remarkably lucky” to suffer only a flesh wound when he was shot at close range by an officer armed with a pistol.

As Mr Gardner, 49, was driving him home armed police, who had been alerted by people in Bishop Auckland, surrounded the vehicle when it stopped at temporary traffic lights.

The terrified taxi driver complied with the commands to put his hands on his head but Houlihan refused, opened his bottle of whisky and picked up his air gun.

Mr Gardner heard a click as Houlihan appeared to cock the gun – although he had not bought any ammunition – and the cabbie fled to safety.

Officers had seen the driver was petrified, the court heard, but his passenger remained calm despite the number of armed police pointing their weapons at him.

Richard Bennett, prosecuting, said: “He then picked up his whisky bottle and promptly drank three-quarters of it in front of the officers.