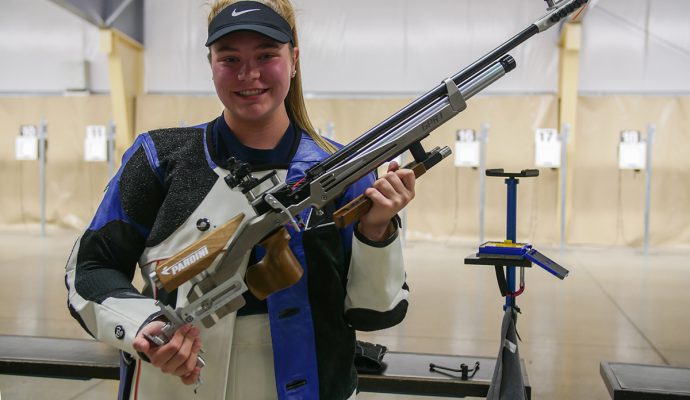 CAMP PERRY, Ohio; ANNISTON, Ala. – After earning wins in 2018 and 2019, Katrina Demerle, 16, of Hamilton, Ohio, returned to Camp Perry in 2020 to claim her third overall win in the precision class during the Civilian Marksmanship Program’s Gary Anderson Invitational (GAI) air rifle event.

Not only did Demerle achieve an unprecedented three-peat during the match, she also fired a new National Record Precision Individual 3×20 plus Final score of 701.4 – only dropping three points in her qualifying round and tallying an impressive Finals total of 104.4.

Her performance was notable under any circumstance but was especially remarkable during the GAI match, given it was only her second time firing her Pardini GPR1 in competition.

“I’ve only had it for a few weeks,” she said, smiling as she packed up her equipment after her incredible showing. “With this new gun, my scores have come up a little bit and have been repeatable.”

Demerle is lucky enough to have a range set up right at her house, allowing her to keep up with regular practice, despite the pandemic and its effects. Committed to maintaining her performance level, she has also been firing in any matches she can find – competing nearly every weekend since September.

She traveled to the GAI with her father, Butch, who excitedly watched as his daughter took each shot toward her third win.

“I think I’m more nervous than she is,” he said as Katrina prepared for her Finals.

With each shot and each “10” added upon her score, Butch’s anxiousness grew, knowing very well Katrina could be making history. He held his breath as she fired her last pellet downrange – a 10.5 and her ninth “X” out of 10 total shots.

A quick glance from the firing line back at her dad, a smile and a sigh of relief were shared between the two as her goals were realized through her extraordinary composure.

The annual GAI match is conducted by the Civilian Marksmanship Program (CMP) at its two 80-point electronic air gun ranges: the Gary Anderson CMP Competition Center at Camp Perry, Ohio, and the CMP South Competition Center in Anniston, Alabama. The junior 3×20 sporter and precision air rifle event allows competitors at both locations to compete against one another, even while miles apart, as their scores are compared to determine overall winners.

Though typically held over the first weekend in December, current social distancing requirements led to the expansion of the GAI on the calendar to allow more individuals and teams to safely record their scores at the air ranges in the weeks leading up to the match, concluding on Dec. 6.

A group of 270 junior athletes competed in the 2020 event, firing record shots at prone, standing and kneeling positions. A 10-shot Final for the top eight competitors usually follows, but the 2020 GAI’s unconventional schedule led all competitors to an additional 10 shots to act as a Finals score.

Also breaking the previous Individual 3×20 plus Final record score but ending in second overall in the precision class was Natalie Perrin, 18, of Coopersville, Michigan, with an outstanding score of 699.3. A senior and a talented rifle athlete, Perrin recently signed with West Virginia University to become a member of the school’s NCAA rifle team in the fall.

Andrew Duryea, 18, of Crossville, Alabama, earned third – cleaning the prone position with a score of 200-18 and earning an aggregate score of 695.3 over the day.

In the sporter class, last year’s third-place finisher Halie Creekmore, 17, of Zion, Illinois, improved her scores to lead with an aggregate of 653.9. Following in second was Austin Dickey, 17, of Clover, South Carolina, with a score of 647.6, as Elijah Glenn, 17, of Ozark, Missouri, landed in third with a score of 642.5.

For a complete list of results of the 2020 Gary Anderson Invitational, visit https://ct.thecmp.org/GAI20results.