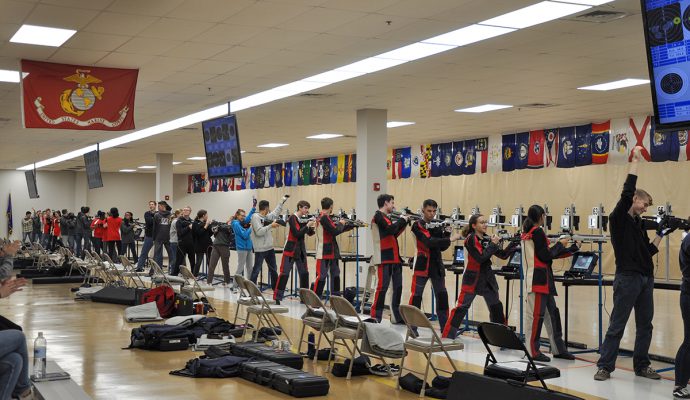 Katrina Demerle, 17, of Hamilton, Ohio, is unquestionably a legend of the Civilian Marksmanship Program’s (CMP) Gary Anderson Invitational – having claimed overall wins in the junior air rifle event in 2018, 2019, 2020 and again, incredibly, in 2021.

Over 340 athletes competed in the 2021 match, which is held annually within the 80-point electronic air gun ranges at both the Gary Anderson CMP Competition Center at Camp Perry, Ohio, and the CMP South Competition Center in Anniston, Alabama. The three-position (3P) competition facilitates athletes as they fire from prone, standing and kneeling positions.

Last year, Demerle fired a new national Precision Individual 3×20 plus Final record score of 701.4 in her third consecutive Gary Anderson Invitational (GAI) win using her Pardini GPR1. She almost matched that score in 2021 with the same air rifle (which she named Giorgio), reaching another outstanding score of 700.6 overall to earn the top spot in the precision category.

“There was a little bit of added pressure [at this year’s Gary Anderson Invitational] since I wanted to have another consecutive win and also wanted to beat my national record from last year,” Demerle said. “But I’ve been competing in 3P since I was 10, so I feel very comfortable at Camp Perry.”

“I will be back to try to win again next year!”

The Gary Anderson Invitational 3×20 sporter and precision air rifle event allows the competitors from Ohio and Alabama to compete against one another, even while miles apart. Along with qualification scores fired by each competitor, a 10-shot Final was held for all athletes on the line in 2021, with the top overall from both locations announced as winners.

Following in second behind Demerle in the precision individual competition, giving an exceptional performance, was Isabella Baldwin, 17, of Nashville, Tennessee, with a score of 697.8. Gracie Dinh, 15, of Starkville, Mississippi, fired 693.9 for third.

In sporter individual action, Sydney Broussard, 17, fired a score of 646.9 to claim the overall win, followed by Asa Wells, 15, in second with a score of 644.9. Landing in third with a score of 640.3 was teammate Hanna McConnell, 17. All of the top three sporter athletes hailed from Ozark, Missouri (as did Elijah Glenn, 18, who finished in fourth).

Find a complete list of results of the Gary Anderson Invitational event on the CMP’s website at https://ct.thecmp.org/GAI21results.

View and download free event photos from the CMP’s Zenfolio page at https://cmp1.zenfolio.com/f437676248.