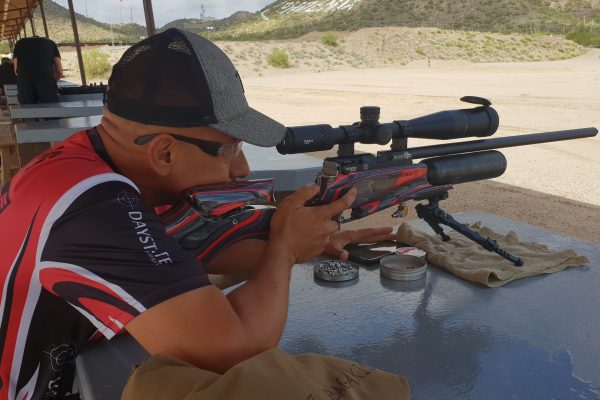 Now in its eighth year and established as one of the most prestigious air rifle target events on the international shooting calendar, the 2018 Extreme Benchrest Championships took place in Arizona, United States from Thursday 11th October. Hosted by premier distribution and retail giant, Airguns of Arizona, the now-famous desert ranges saw 160 airgun shooters from across the globe compete shoulder to shoulder for the high-value prizes up for grabs in the various disciplines held over the course of the four-day competition.

With Extreme Benchrest attracting the best of the best, both shooters and their equipment are pushed to the very limits of precision. It’s therefore rare to see any one air rifle dominate at all levels – but 2018’s event saw one gun rise unerringly to the fore: the Daystate Red Wolf!

With an already proven pedigree in the hunting field since the launch of this new rifle at the beginning of the year, we were hopeful the Red Wolf would fare well in Extreme American Field Target disciplines. But with the high-precision event attracting so many other stellar air rifles by necessity, even we could not predict the impressive haul of victories the new Red Wolf would ultimately amass in the hands of some of the world’s finest marksmen.

The first result to come in for the Daystate was in Field Target, where shooters battled it out over a difficult course of knockdowns laid out to a very testing 100 yards. Ultimately, it was Airgun Nation’s Michael Wendt who emerged victorious, with his Red wolf carding a maximum score no less – 40 out of 40! Despite a field littered with high profile shooters and famous airgun brands, Daystate then went on to lock-out the entire podium, with Red Wolf shooters Ben Spencer and Tony Turchetta joining Wendt for the medals ceremony!

Next was 50-metre Benchrest – a target-based competition based on precision and consistency. Historically, this has been the preserve of other air rifle manufacturers, but 2018 saw a complete turnaround. The three top places not only went to Daystate shooters, but winner Sandy Corcorran, and runners-up Dan Fujimagari and Ken Hicks Jr. each used a Red Wolf to beat the gusty winds, carding scores of 707, 706 and 701 respectively. Another Red Wolf lock-out!

With hunting and target orientated courses already being tamed by the Red Wolf, next up was the Speed Silhouette discipline, which tests not only the shooter’s loading dexterity, but also the speed at which they can acquire and then drop the metal knockdowns under pressure of the clock. Adding to the speed-shooting spectacle this year was the wind and torrential rain that had turned the hot, dry desert ranges into an even tougher arena than ever. Yet despite challenging climatic conditions, one air rifle was to emerge to the fore – yes… the electronic Daystate! No fewer than eight of the 10 finalists took up their position with a Daystate in their shoulder, Red Wolves being the dominant force among them. Again, first, second and third places in the Pro Class went to competitors shooting a Red Wolf, with winner Michel Wendt being joined on the rostrum with runners-up, Tom Adams and John Bugacca.

Finally, the Championships’ Extreme Benchrest finale. With a prize pot of $5,000, it’s the event everyone wants to win, but not one for the faint-hearted. Two qualifying shoots at 75 metres whittle the field down to a 30-man final, where everything’s to play for at the extended range of 100 metres. As if that’s not extreme enough, a howling wind and the earlier monsoon-like conditions conspired to make 2018’s competition one of the toughest ever. It would take a special shooter, and a special rifle, to take victory…

The dominant grip of Daystate’s 2018 Red Wolf flagship was to be broken in the final. Against all the odds – the extreme conditions and the threat of no fewer than 12 Red Wolf shooters taking their places in the Pro Class Final – it was a rifle from Daystate’s sister company that scooped the spoils. Claudio Flores from Patagonia Airguns steered his Brocock Bantam Sniper HR to win the Championships’ top gun prize, and take a very well-earned cheque for $5,000 back home to his native Chile.

With all the results in other Competitions could now be decided. The Gilbert Grand for the best result with a .22 rifle was won by Claudio Flores.

The One Gun Challenge sponsored by Daystate in which competitors must use the same gun for all disciplines was again won by Airgun Nation’s Michael Wendt.

Airguns of Arizona’s 2018 Championships proved, once again, why Extreme Benchrest is such a prestigious tournament for the world’s elite air rifle marksmen. It’s an event that encompasses extreme challenge with extreme excitement, but where the emphasis is on extreme precision.

ULTIMATELY, ONLY THE BEST OF THE BEST WILL CUT IT. IN 2018, THE RESULTS MADE ONE THING EXTREMELY CLEAR: THE DAYSTATE RED WOLF IS THE UNRIVALLED CHOICE OF WINNERS.

For a full round up of all the results please visit www.extremebenchrest.com