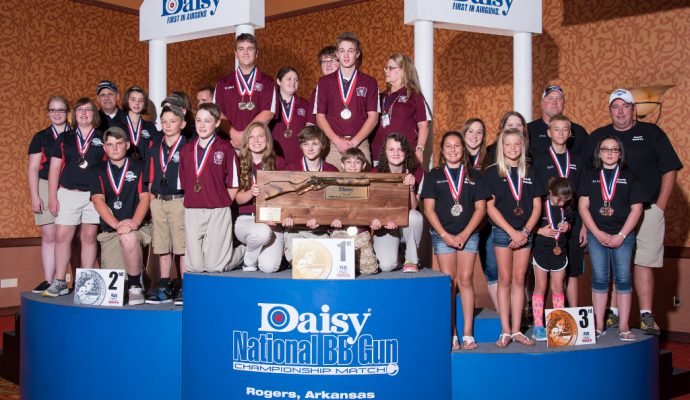 Daisy has been a prominent name in the air gun industry for over 125 years. Its beginnings are rooted in time itself – that is, the company stemmed from the idea of Michigan watchmaker and inventor Clarence Hamilton.

As legend tells, one of the board members of the windmill company test fired Hamilton’s prototype and shouted out, “Boy, that’s a Daisy” (a colloquialism of the era). By 1895, the popularity of the rifles has grown exponentially, and the Daisy Manufacturing Company was born.

Today, based in Rogers, Arkansas, the company specializes in rifles, pistols, archery equipment and even sling shots.  One of Daisy’s main objectives is safety – a concept the company has emphasized since inception.

CMP and its competitors are appreciative recipients of Daisy’s generosity. During one of CMP’s popular JROTC Air Rifle Service Championships, in late 2018, Daisy released its new Model 599 Competition Air Rifle – a .177 caliber that allows competitors to complete an entire 10-meter match without needing a recharge of air. At the following year’s competition, Daisy awarded eight of the new 599 rifles to winners from each military branch during the 2019 Service Championships.

Daisy attends many CMP air rifle events, with a booth where Daisy employees personally speak with guests on current products, while working alongside CMP to celebrate youth endeavors.

In an effort to better understand the company’s fundamental principles, the CMP spoke with Daisy public relations director, Lawrence Taylor, on how Daisy originated and how it maintains its commitment to marksmanship through the CMP and within its own merits.

“Daisy has been making BB guns for more than 100 years, so we’ve been a part of teaching youth gun safety and marksmanship for generations,” said Lawrence Taylor, public relations director for Daisy. “We know that comes with a lot of responsibility. Daisy takes gun safety lessons seriously and has for decades.”

Several years ago, a national survey of consumers was conducted by Daisy within national sporting goods stores in order to gain an understand of the public’s take on not only the company itself but also the habits and personalities of outdoor enthusiasts.

Back in the late 1940s, Daisy created the first gun safety curriculum that was taught in physical education classes at public schools. The same curriculum (with many updates) still exists today and is used by coaches in junior shooting sports programs like 4-H, Royal Rangers and other youth organizations.

Most of these programs feature their own BB gun teams, formed as an introduction to competitive shooting sports. The teams participate in shooting matches throughout the year, including the Daisy National BB Gun Championship Match for qualifying youth, ages 8-15. The annual event features a five-meter, four-position match that attracts teams from across the country, with a 10-meter air rifle event open to ages 16-18.

One project that Daisy is especially proud of is its inflatable range program the company implemented more than a dozen years ago. The portable range was designed to address the complexity of providing a safe, clean way to present marksmanship to youth, with the design of a self-contained, inflatable BB-gun range that can be set up indoors or outdoors. The CMP has even acquired one of the inflatable ranges from Daisy that is now used at local festivals and other public events to help increase awareness on marksmanship safety and fun as well as to introduce the programs the CMP has to offer.

“At first glance, you think it’s a bouncy house, but it’s really a two-lane shooting range that captures all of the BB’s for easy cleanup,” Taylor said. “We sell them to youth and conservation organizations but also rent them to other groups for just the cost of shipping and a $100 cleaning fee, if they qualify to run the range safely.”

As the leading manufacturer of air guns with a strong commitment to its marksmanship programs, it’s clear the company is genuinely devoted to emphasizing shooting safety. It’s that ambition, which compliments CMP’s mission of the promotion and practice of firearm safety, that preserves the partnership between Daisy and the CMP and has kept both companies’ positive influence on the marksmanship community for decades.

Adding his own impression, Daisy special market coordinator Taylor Ballinger, a company representative seen at CMP events, said the company’s decision to keep a close relationship with the CMP is simple: “To teach the younger generation,” he said. “With the facilities that the CMP has and the shooting events that they put on every year in different locations throughout the U.S., we think it is a great way for more people to learn the proper methods of gun handling and marksmanship.”

The CMP thanks Daisy for being a part of the youth-shooting team, and looks forward to many more years of healthy relationships with Daisy.

To learn more about Daisy and its products, visit their website at https://www.daisy.com/.

The Civilian Marksmanship Program (CMP) has been dedicated to firearm safety for U.S. citizens, especially youth, for over two decades. The CMP’s marksmanship competitions and clinics held around the country throughout the year have been essential in dispersing safe practices, but the organization still seeks the support of other marksmanship entities who are also dedicated to the cause.

Daisy Outdoor Products, a leading producer of air guns and other marksmanship equipment, has been an unwavering sponsor of CMP events for several years – dating back longer than anyone currently within the Daisy corporation can remember. It’s a partnership that maintains a core goal that surpasses the need to establish any measure of commitment, with Daisy’s own advocation of marksmanship safety extending beyond equipment needs into encouraging proper instruction and handling procedures for junior marksmen.