You are here: Home / Airguns / Daisy Celebrates 80 Years of the Red Ryder with Special Commemorative Edition 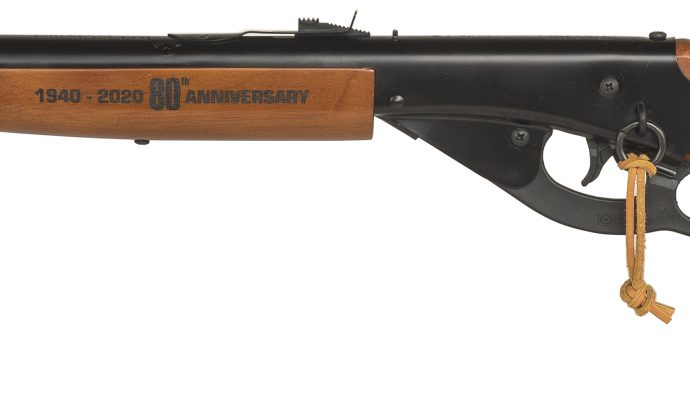 ROGERS, Ark., Aug. 10, 2019 – In the 1940s, American youth were all about cowboys. From the Saturday Matinee Westerns at the downtown movie house to kids gathered around the family radio to hear about cattle rustlers and cowpokes, and to comic books read by flashlight under the covers way past bedtime, everyone wanted to be a cowboy. And what’s the most important tool a cowboy uses? It’s his rifle, of course – a sturdy lever action carbine built to tame the wilds of the West.

It was 1940, and Daisy introduced what would become a legendary air rifle – the Red Ryder.  It had everything youth were looking for – wood stock and forearm, sturdy lever action, a saddle ring and a real leather thong. It’s only natural that young boys (and many young girls) depended on their Red Ryder to take on bank robbers, cattle rustlers and ducks on the wing.

This most-famous BB Gun celebrates its 80thanniversary in 2020 with a special edition featuring elegant engraving on the forearm and a commemorative medallion in the stock, in addition to all of the features that made this gun the all-time No. 1 American Christmas present.

The Daisy Model 1938 Red Ryder has remained mostly unchanged during these 80 years – a few cosmetic changes, a couple internal improvements and a tiny bit of tinkering for performance – but most would be hard put to see the changes. And, down deep, America’s youth haven’t changed all that much, either. More youth take their first shots with a Daisy than with any other BB gun. Riding the range with your trusty carbine at your side may not fill their dreams any more, but no one can deny the thrill of toppling a pop can the first time with your very own Daisy Red Ryder.