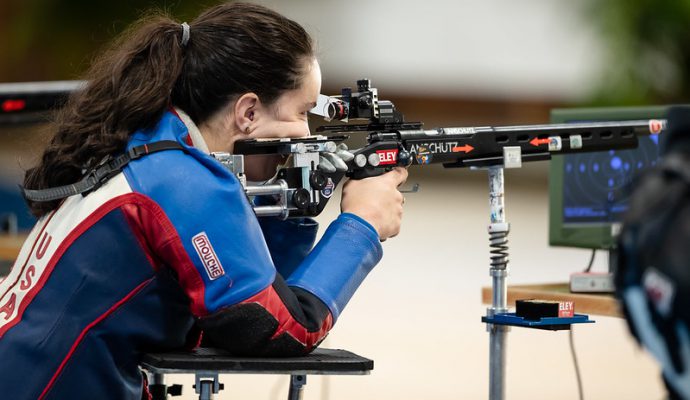 McKenna Dahl (Arlington, Wash.) battled the blustery conditions in Sydney, Australia, on Thursday to qualify for her second consecutive final in the R9 mixed 50-meter prone SH2 event during the sixth day of competition at the 2019 World Shooting Para Sport Championships. Dahl had previously won the qualification in this event at the World Cup in Croatia.

“This match was shot in some of the windiest conditions I have witnessed on an international level range,” said U.S. Paralympic Team Coach and Manager William Anti. “The wind blew consistently in excess of 15 mph and was extremely variable in direction.”

Dahl fired a 613.3 which qualified her for the final in second place. She would eventually finish sixth and because she had previously won a quota, was not eligible to win another. Dahl’s teammate in the event, Stetson Bardfield (Colorado Springs, Colo.), fired a 582.0 to finish 50th.

Tricia Downing (Denver, Colo.) competed in the R2 women’s 10m air pistol on Thursday and placed 25th with a total score of 534.

Also on Thursday, the R6 mixed 50m prone SH1 conducted the elimination phase of its competition and, despite the incredibly windy conditions, both Americans made it through to Friday’s qualification matches. Kevin Nguyen (Columbus, Ga.) was the high American with a 616.1. He will be joined in Friday’s qualification by Taylor Farmer (Castalia, Ohio) who fired a 597.6.

Farmer was coming off a 15th-place performance the previous day in the R2 women’s 10m air rifle standing SH1 where she had a 606.1.

Live coverage and replays can be found at https://www.paralympic.org/sydney-2019.