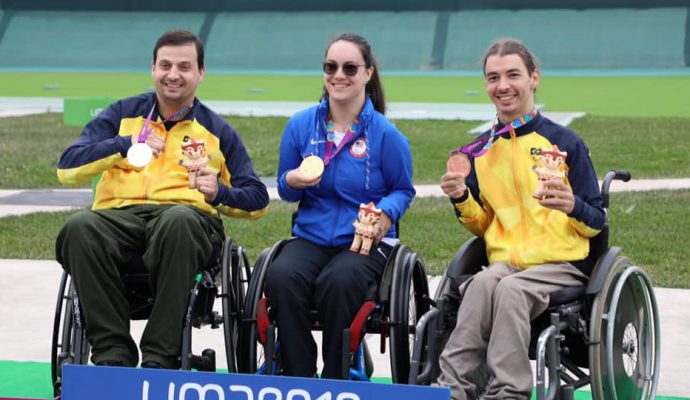 McKenna Dahl (Arlington, Wash.) just keeps making history. As shooting made it’s Parapan American Games debut on Saturday in Lima, and three years removed from becoming the first U.S. woman to win a medal in the sport at the Paralympic Games, Dahl etched her name in the Parapan Am Games record book as shooting’s first gold medalist in the event’s history, winning the mixed 10m air rifle standing SH2 competition. She also became the first gold medalist in any sport for Team USA at the 2019 Parapan Am Games.

“I’m really excited that I get a chance to represent the United States down here.,” said Dahl. “This is the first gold medal of my shooting career so it’s really exciting to see my progression before Tokyo [2020 Paralympic Games].”

Finishing the morning’s qualification round with a top score of 628.1, Dahl continued her mastery in the final, finishing a full point ahead of silver medalist Alexandre Galgani of Brazil, 251.2-250.2. Galgani’s teammate, Bruno Kiefer, claimed the bronze medal.

“We were a little nervous at the beginning,” Dahl said of the competition. “The siders [competitors on both sides] made me a little nervous about how the match was going to go, hold was a little shaky, but I went into the match really determined to work hard and shoot well, and I think that’s how it played out.”

Dahl’s teammate, Jazmin Almlie-Ryan (Houston, Texas), was disqualified from the competition following the morning’s qualification round due to her rifle being over the allowable weight.

Full schedules and results can be found at https://www.lima2019.pe/en/results.