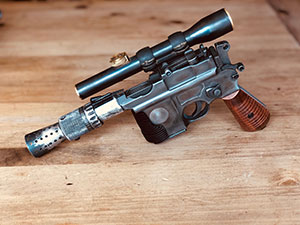 This gun needs very little introduction. Even Californians can recognize the DL-44 Blastech Blaster. This one, though, is special. Not only is this a one-of-a-kind reproduction of a classic galactic war film prop, it is also a working BB gun. This blaster began life as an Umarex Legends M712, and it’s being auctioned to benefit the Student Air Rifle program.

Umarex is known for their incredibly detailed historical reproductions, but the DL-44 transformation was executed by Chris Turek (aka the UpNorth Airgunner). The auction, which will be hosted on Gunbroker from May 4th to May 10th as part of the annual May the 4th Be With You celebration.

The history behind the iconic blaster featured that has been in an exponentially expanding universe of movies, games, and books that takes place in a galaxy far away is not easy to chart.

Let’s start with the facts. Back in the early 70s, the design team working to make A New Hope weren’t thinking about any kind of lasting legacy. They were making props. They had a habit of using real objects as the base for their designs. To add some futuristic details, they used “greeblies.” A greeblie is simply something added to a prop to make it look less like the original object. Many of these greeblies were found by “kit bashing,” the practice of cannibalizing model kits to produce new, and original results.

The base of the original DL-44 is obviously a C96 Mauser. The C96 wasn’t a typical C96, but one with a take-down bull barrel. This made it easy to add on the flash-hider—which came off of a MG81.

Where did George Lucas’s team find all of these gems? They had gone to England for some of the filming of A New Hope, and worked at Elstree Studios. Elstree had its own prop house, but there was a gold-mine to be found at Bapty & Co., one of the largest prop weapon suppliers in Europe.

Bapty & Co. opened at the end of World War I. Imagine the stockpile of surplus guns that they could have acquired at the end of European and global conflicts. The collection at Bapty is supposed to be mind-blowing.