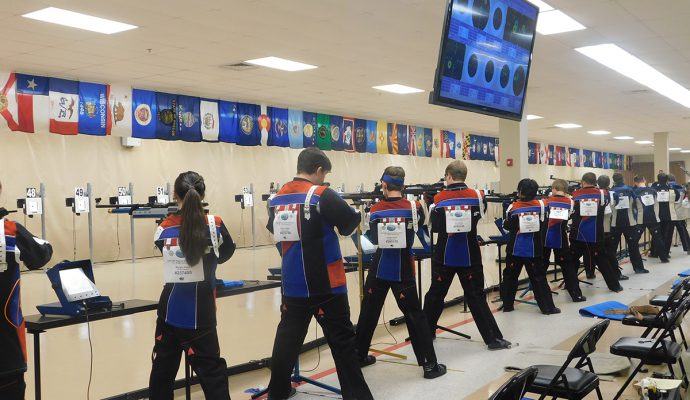 The Civilian Marksmanship Program (CMP) has announced the top performers of its Monthly Match League competition series for the 2020 season.

The Monthly Match League names the top three outstanding participants from an average of each individual’s Monthly Match scores from repeat attendance. The first three places receive plaques for their performances, and places one through five collect monetary prizes based on the number of entries. The Most Improved competitor, with the highest margin of score progression, is also recognized with a signature plaque.

Earning the overall spot in the 3×20 Precision Match was Natalie Perrin, 18, of Coopersville, Michigan, with an average score of 595.0. Following in second was Jacob Day, 15, of Columbus, Georgia, squeaking above third place competitor Douglas McWhorter, 17, of Springville, Alabama, by only three-tenths of a point – scoring 586.3 and 586.0 averages, respectively.

Most Improved competitor of the 3×20 Match was Victoria Petersen, 18, of Hendersonville, Tennessee.

Perrin also led the 60 Shot Rifle event, with an average score of 621.0. Julie Klusmeier, 25, of Cincinnati, Ohio, overtook second with a score of 613.2, with Angus Babcock, 17, of Lithia Springs, Georgia, landing in third over the field of nearly 270 total entries.

Grayson Ellis, 14, of Anniston, Alabama, mounted a difference of 38.7 points to be named the Most Improved competitor of the 60 Shot Rifle Match.

In 3×20 Sporter, Trinity Sandoval, 14, of Piedmont, Alabama, led overall with an average score of 515.8. Fellow Piedmont resident Devyn Chapman, 14, followed in second place and was also the Most Improved competitor, with a score of 506.5, as Ditsy Werner, 16, of Kennesaw, Georgia, earned third.

Out of over 60 entries in the 60 Shot Pistol event, Lauren Herrington, 31, of Buford, Georgia, earned an average score of 518.5 to claim first, with Renay Woodruff, 48, of Alexandria, Alabama, firing a score of 503.8 for second. Alun Deniston, 63, of Bowling Green, Ohio, rounded the top three competitors with an accumulative score of 495.5. Ashleigh Smith, 15, of Cement City, Michigan, was the Most Improved competitor by a difference of 50 points.

The CMP’s Monthly Matches will return Feb. 6, 2021, at the Ohio and Alabama locations. Visit the CMP web page (https://thecmp.org/ranges/cmp-competition-centers/monthly-air-rifle-and-air-pistol-matches/) to view a full schedule and results of the 2020 Monthly Match League.

Photos from the Monthly Matches can be found on the CMP Zenfolio page: www.cmp1.zenfolio.com.

The CMP’s air gun facilities are open to the public, year-round, and feature 80-point ranges filled with CMP’s own electronic targets. Currently, the CMP air gun ranges are open only by appointment and adhere to state regulations regarding Covid-19 safety.

The South Competition Center in Alabama includes the CMP South Store that is fully stocked with equipment and memorabilia needs. Marksmanship Nights, held weekly at the range for the public, allow visitors of virtually any age and experience level to try their hands at air rifle or air pistol shooting.

The Gary Anderson CMP Competition Center in Ohio features authentic Olympic and other memorabilia from the career of celebrated American marksman, Gary Anderson. The facility also includes a retail center for equipment and memorabilia needs.

Learn more about the CMP Competition Centers by visiting the CMP website at https://thecmp.org/ranges/cmp-competition-centers/.