You are here: Home / Competition / CMP Summer Rifle Camps Host Over 460 Juniors Across the Country in 2022 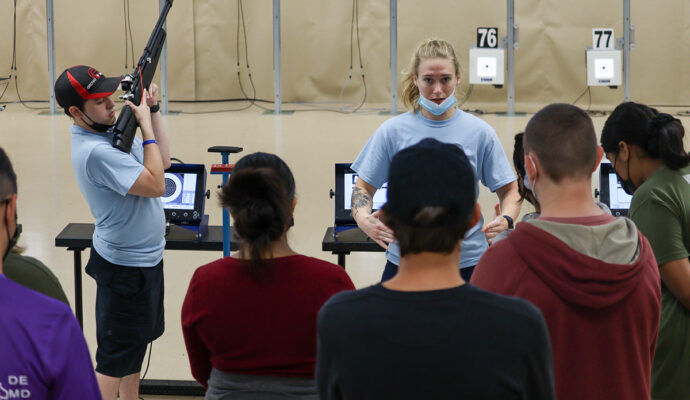 The CMP utilized the experience of new Junior Rifle Camp coordinator, Ryan Hinson, to effectively host each course. A NCAA rifle athlete at Morehead State while in college, Hinson had previously worked as a CMP Summer Camp counselor for two summers, in 2018 and 2019, and served as an assistant director during the summer of 2021 before being hired full-time by the CMP this year.

“I think we truly did have a great year of camps,” he said. “A big thank you to all of the participants for bringing great attitudes to camps and being patient through the coordinator transition. Thank you to the summer camp counselors for making the transition easy on myself personally, but most importantly, for being great coaches and leaders to this year’s youth. Without either of the two, this year’s camps would not have been as special as they were.”

“The CMP is excited to bring some fresh ideas to the upcoming camps,” he added. “And we look forward to seeing some new and familiar faces next summer!”

The Junior Rifle Camps train young athletes on rifle fundamentals and techniques through group discussions and range exercises. The camps are excellent tools in developing each athlete’s strengths within the physical and mental aspects of the sport while refining trouble areas. Students are able to apply the constructive lessons learned in camp to their own marksmanship careers, with many moving on to college programs and beyond.

Athletes in the CMP Summer Camps are coached directly, one-on-one, by qualified student-athletes from some of the top NCAA rifle teams in the country. During the week-long camp sessions, juniors learn competition shooting essentials such as:

Outside of the week-long curriculum, other options for juniors include Advanced Standing Camps (designed to be a follow-up program for those who have attended one or more of the three-position camps or clinics) and Outreach Clinics (nearly identical to the full-length course, with a compressed three-day format).

Learn more about the Junior Rifle Camps and Clinics page on the CMP website at https://thecmp.org/youth/junior-air-rifle-camps-and-clinics/.