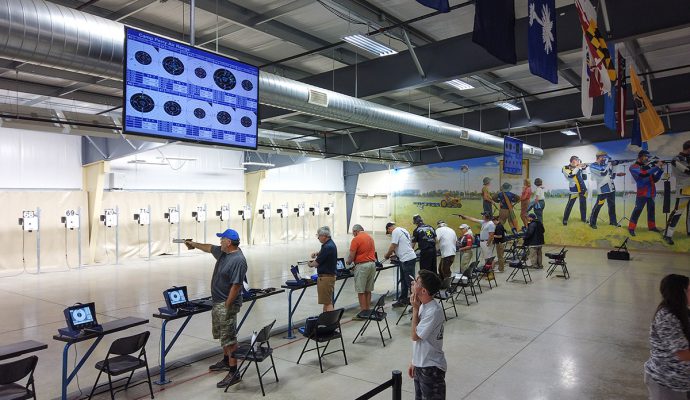 CAMP PERRY, Ohio – Fired throughout the Civilian Marksmanship Program’s (CMP) National Matches in July and August, the National Air Gun events welcomed over 640 air rifle and air pistol entries, fired by competitors of all ages from around the country. The matches were held within the Gary Anderson CMP Competition Center, located on the grounds of the historic Camp Perry National Guard Training Facility, where the National Matches have been conducted for over a century.

The National Air Gun Matches feature a variety of events, suited for both seasoned competitors and those new to the sport. Traditional 60-, 40- and 30-Shot events as well as modern Bench League opportunities (shot from a supported position) lined the schedule for competitors to choose from during the summer months.

Those who competed in the 30 Shot event were automatically entered into a Center Shot contest, where participants who fire closest to target center have the chance to win money, based on participation. Judy Tant, 71, of East Lansing, Michigan, earned the top spot in the National Matches Pistol Center Shot competition with a 10.9X closest from target center at 0.101980mm. For her win, she received $159.50 from the CMP.

Also receiving prize money in the contest were the next seven closest competitors (all firing 10.9s):

Likewise, competitors in the 30 Shot Standing Rifle event were automatically entered into the Center Shot contest. Claudia Muzik, 15, of Green Springs, Ohio, was the closest from target center at 2.37876018mm and received the overall cash prize.

Other 60 Shot Air Rifle awards included High Woman and High Junior honors, which both went to M’Leah Lambdin, 18, of Colorado Springs, Colorado, for her score of 619.4.

An AiR-15 Challenge Match, featuring air guns that resemble service AR-15 rifles, was also held during the National Air Gun events. The match typically includes a concluding final amongst the top competitors but was removed for the 2021 event. Leading this year’s match was the Army Marksmanship Unit’s Sgt. 1st Class Brandon Green, 36, of Box Springs, Georgia, with an overall score of 397-15X.

The CMP’s 30 Shot Bench League allows participants to compete a national-level event, even if he or she has never competed before. During the League, competitors fire air sporter, precision or AiR-15 rifles off of a fixed support for added stability – providing a fun and challenging experience for all. Earning the win in the AiR-15 Bench League Match was Larry Bush, 73, of Perrysburg, Ohio, with a score of 309.6. Larry Kiraly, 68, also of Perrysburg, fired a 315.0 for the overall win in the sporter match, with Philip Edwards, 73, of nearby Marblehead, Ohio, coming out on top of the precision match with a score of 318.9.

View a complete list of the 2021 Camp Perry National Air Gun results on the CMP Competition Tracker page at https://ct.thecmp.org/2021nmageresults.

The CMP’s indoor air gun range is equipped with 80 electronic firing points. The range is open to the public and has rental equipment available. Pellets are available for purchase and CMP’s Range Safety Officers are available to help visitors get on target. Learn more at https://thecmp.org/ranges/cmp-competition-centers/.