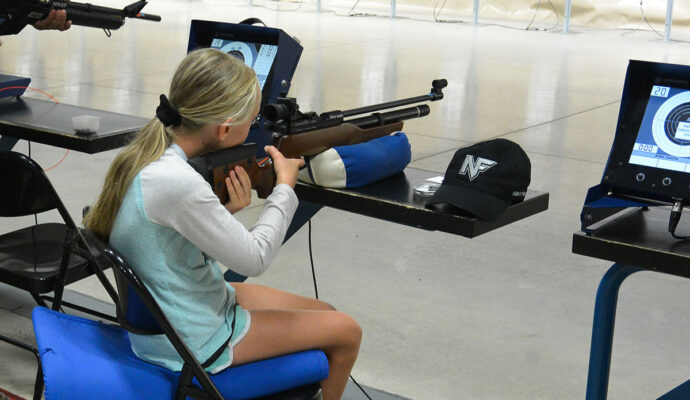 The 2022 National Air Gun events, held as part of the Civilian Marksmanship Program’s (CMP) National Matches, welcomed over 580 air rifle and air pistol entries throughout July and August. The events are held within the Gary Anderson CMP Competition Center, located on the grounds of the historic Camp Perry National Guard Training Facility, and utilize the technology of indoor electronic targets – capable of simulating multiple yard lines from a fixed firing point.

The lineup includes a variety of opportunities suited for both seasoned competitors and those new to the sport. New to the schedule in 2022 was the 100 Shot Challenge, which consisted of a whopping 100 record shots. Winning the Air Pistol competition was Daniel Miller, 40, of Mineola, Texas, with a score of 912-7X, as Claudia Muzik, 16, of Green Springs, Ohio, overtook Air Rifle with a score of 994-75X.

Finding the win in the 40 Shot Vintage Air Rifle Pneumatic Sniper Match, fired at a simulated 300 and 600 yards to mirror the outdoor Vintage Sniper Match, was Larry Bush, 74, of Perrysburg, Ohio, with a score of 396-19X – besting last year’s winner, Thomas Wonderly, 76, of Portage, Ohio, by two points.

An AiR-15 Challenge Match was also on the schedule, featuring air guns that resemble AR-15 rifles and a simulated 100-yard target. Leading the event for the second consecutive year was SFC Brandon Green, 37, of Box Springs, Georgia, with a score of 396-19X. David Baalman, 48, of Richland, Washington, topped the 20 Shot AiR15 Standing Match with 192-3X.

The CMP’s Bench League allows participants of any age to compete in a national-level event, even if he or she has never competed before. During the League, competitors fire air sporter, precision or AiR-15 rifles off a set support for added stability – providing a fun and challenging experience for all.

Claiming the overall win in the 60 Shot Bench Air Rifle Match was Philip Edwards, 74, of Marblehead, Ohio, with a score of 632.3. Edwards finished just one point above Riley Dunn, 16, of Washington, Pennsylvania, who landed in second.

Edwards also led the Bench League 30 Shot Precision Match by only seven-tenths of a point. Larry Kiraly, 69, of Perrysburg, Ohio, led the 30 Shot Sporter Match by a narrow margin, as Bush returned to claim the win in the AiR-15 competition.

A Center Shot contest, where participants who fire closest to target center have the chance to win money, based on participation, also challenged competitors in the air gun range in both rifle and pistol categories. Leading the Rifle Center Shot contest was Scott Braun, 52, of Belvidere, Illinois, who fired the only 10.9 shot. Also firing a 10.9 was Amy Trombley, 57, of Canton, Michigan, who led the Pistol Center Shot and earned over $90.

The Gary Anderson CMP Competition Center is open to the public, year-round, and features an 80-point range filled with CMP’s own electronic targets. The facility also features authentic Olympic and other memorabilia from the career of celebrated American marksman, Gary Anderson, as well as a retail center for equipment and memorabilia needs. Learn more by visiting the CMP website at https://thecmp.org/ranges/cmp-competition-centers/.