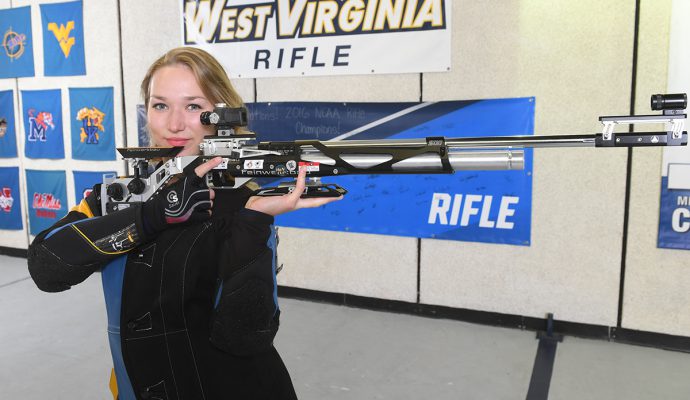 The West Virginia University (WVU) rifle team is in its 71st year of existence – beginning in 1951. During that time, the team has won 19 of its 33 NCAA Championship appearances (the most recent in 2017) and has cultivated 32 Olympic athletes, including 2016 gold medal winner, Ginny Thrasher. Last year, team members produced a record of 9-1. Current head coach, Jon Hammond, is in his 14th season with the Mountaineers, securing an overall record of 150 wins, 15 losses and six NCAA National Championships. Assistant coach Soren Butler is a University of Alaska-Fairbanks rifle alum and is a two-time National Rifle Association All-American.

Were you a shooter before coaching? Yes, I started the sport at age nine at a school in Scotland. I progressed through the Scotland and Great Britain junior national teams and then into senior teams. Highlight as a junior shooter was winning the World Junior Championship in Prone in 1998.

I came to the USA to compete on the WVU rifle team in 2002 after completing my bachelor degree back home and working to get my masters (Sport Management). I took a few years away from shooting after graduating and working but returned to the sport in 2006, taking the Head Coach position at WVU. I was fortunate to be in the right place at the right time and haven’t looked back.

After that, I began to compete again, while simultaneously being the Head Coach. During the past 10 years, I competed on the international circuit, including the 2008 and 2012 Olympics.

Favorite reason for coaching: I have always felt I go to the rifle range rather than going to work. It’s such a fun job that is very rewarding, and, ultimately, you are doing something you love to do. The fact that it’s your job as well is a bonus.

What is a day as your shooter like? Typically, the team members go to class in the morning and come to the range for training in the afternoon as well as fitting in some team workouts, other meetings and, of course, lots of studying in the evenings and any other open window of time!

In terms of at the range, it varies a lot. Each team member has different needs and things they must improve and work on, so their time at the range can very each day in what they do.

What is your biggest challenge as a coach? I really believe the actual coaching is only 30-40 percent of our job. We are planning, organizing, managing budgets and generally making sure the program is going in the right direction. Then, we are managers, advisors and even parents away from home to the team members, as well as coaches. For me, I think the biggest challenge is just balancing all the things that go into running a college program. Saying we are a coach is very simplistic, as it can be more administrative and general managing at times, but, of course, being a coach to help the team members achieve their goals as well. Simply making sure all areas are covered and not neglected may be the biggest challenge.

For college athletes, enjoy the journey and each day. Sometimes it’s a grind, but if we want something hard enough, we have to work for it.

For graduating college seniors, give back to your programs when you can! This can be with your time and help, and not necessarily financial…but that helps too. ????

What college did you shoot for, and what do you have a degree in? I shot for the University of Alaska-Fairbanks, where I was a Nook for five years. I studied business during my time there and acquired both a Bachelor of Business Administration and a Master of Business Administration. After my time in Alaska, I joined WVU as a Graduate Assistant coach, where I received a Master of Science in Sports Management.

What did you like about being a CMP Junior Rifle Camp Counselor? I’m not sure I can accurately express how much I enjoyed my time working as camp counselor and assistant director for the CMP Summer Camps. I learned so many things about the sport of shooting, working with people of all ages and skill sets, how to lead and manage teams and tons of problem solving! I became friends with many people who are still great friends to this day, and it made my time in college more fun as I knew so many people in the community.

I loved being able to travel and see so many places around the country, but I also really enjoyed my time getting to know and working with all the different athletes. I think this is where I first thought coaching is something I could do as a job. I will forever be thankful for the opportunity I had to work for CMP and all the great memories I made there.

What is a day as your shooter like? I don’t want to double up on answers, as I think Jon did an excellent job explaining what a “day-in-the-life” looks like for one of our student athletes. I think, for me, this also includes a daily chat/banter with most of them to just see how everyone is doing and continue to learn more about them and build a better connection.

What is your biggest challenge as an assistant coach? For me, the biggest challenge in the beginning was just the proximity of age. Coming to coach right after competing meant that a lot of the athletes knew me as a peer rather then a staff member. I think this has gotten a little easier every year as I continue to age (getting old!) and have more of a separation there.

After that, I think the hardest thing is just trying to understand how I can best help each one of our athletes. The same coaching approach doesn’t work for everyone, so I think we really pride ourselves on being able to reach each athlete where they’re at (or at least trying to) and learning how we can make them better most efficiently.

Advice for junior shooters wanting to compete in college and for college athletes and graduating college seniors? My advice for junior shooters and college shooters would be to just work harder than you think is needed to make it where you want to be. Also, I would add that I hope they spend a considerable amount of time working on their mental approach. This aspect of the sport is so important, and if you can build a solid foundation early in your career, it will only bode well in the future.

As for graduating seniors, I would just encourage you to soak up every minute you can. Take in all the little things even if they’re not exciting because it’ll soon be over. Not that there aren’t great things waiting on the other side, but this is a super cool time in your life and there are lots of great memories to be made. Finally, I would encourage all of you to turn over every stone you can.

What is your major? Double Major in Music (main instrument: harp) and French. I grew up in a family of musicians, so music has always been the main part of my life (until I started shooting). As for my French major, I started taking interest in the language when I took French classes in high school and finally decided to make it my major in college. So far, my favorite class is chamber music because I love working with other musicians in ensembles.

How old were you when you got involved in rifle? 14

Favorite rifle and stage? I think I go through phases where I prefer air rifle, and sometimes I just prefer .22, but, in general, I would definitely say that standing is my favorite position.

What do you do outside of rifle to train and better yourself? I think working out and meditating are two main components of the training I do outside of rifle practice. I think that workouts really train discipline and following through with something. They also help me improve my core strength, which is really what you need as a shooter for injury prevention. Meditation (mindfulness training) is a big part of shooting because of the mental aspect that is emphasized in our sport. Therefore, recognizing your thoughts and emotions is essential to rifle shooters.

Future plans/goals for rifle and life? I would like to continue my shooting career after college. Whether that path will lead me to the Olympics or national matches, doesn´t matter to me. I just want to see how far I can get in my sport and perform the best I can.

What is your major? Exercise Physiology. I plan to go to Medical School. My favorite class is organic chemistry.

How old were you when you got involved in rifle? 14

What do you do outside of rifle to train and better yourself? Run/lift, meditate, yoga, sleep

Any additional comments/stories/advice you’d like to add? Read “Bullseye Mind”

What is your major? I study Exercise Physiology because it is a great gateway major for all post undergraduate health professional schools. My favorite class is Pathophysiology because I find the mechanism of disease in the human body to be very fascinating.

What do you do outside of rifle to train and better yourself? I do workouts with the team and then do some on my own time. I also work hard to better my relationship with God because shooting for Him has become the number one reason I enjoy competing at the collegiate level.

Future plans/goals for rifle and life? After college, I will no longer compete. I want to attend Physician Assistant school and, unfortunately, I will no longer have time for my rifle career. I believe God is calling me to move on to a new chapter in my life and as hard as it will be to give up something that I have been doing for almost my whole life. I am accepting of it because I know my purpose for the future.

Any additional comments/stories/advice you’d like to add? Enjoy the little things and do not wish away your high school days or your time in college when you finally get there. There is a season for everything, and every season is there to teach you something. It is hard to learn if you are not living for the present moment.