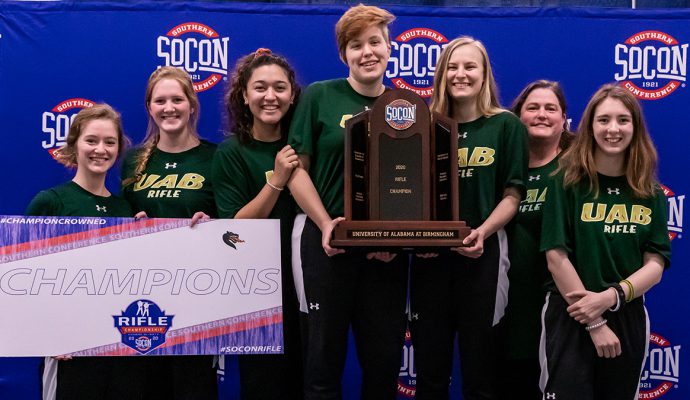 The University of Alabama at Birmingham (UAB) rifle program was founded in 1993 by the Father of UAB Athletics, Gene Bartow. Head coach Lori Goodwin has been at the helm of the program since 1995 and just completed her 25th season. A native of the Birmingham area, Goodwin was a member of the inaugural team in 1993 and served as captain of the squad in 1994 and 1995.

In the past five years, the Green and Gold has burst onto the national scene – winning two of the past three Southern Conference Championships and often finding itself in the College Rifle Coaches Association Top 20, including all of this past 2020-2021 season. UAB won its first-ever rifle conference championship in 2019 and followed it up with another league title in 2020 before finishing third in the Southern Conference (SoCon) in 2021.

Were you a shooter before coaching?  If yes, what were some of your accomplishments. Yes, I shot for four years on my high school rifle team. Then I shot for UAB for the first three years of the team. After I graduated, I was asked to become the head coach and have been here ever since.

Favorite reason for coaching: I love making a difference in students’ lives. Getting to coach them and seeing them succeed in rifle and then in life is so worthwhile.

Advice for junior shooters wanting to compete in college and for college athletes and graduating college seniors? To the junior shooters, do not sell yourself short. If you really want to continue to shoot in college, find one with a program and just ask the coach. A lot of the time, they may take a chance on you. To the college athlete, never give up. Strive to do your best! What is your major? Why? Favorite class? I am majoring in Electrical Engineering with a minor in Mathematics. My favorite classes tend to be my math classes. I loved Differential Equations because I like how you can apply these complicated math equations to the real world to solve problems.

How old were you when you got involved in rifle? I joined my high school rifle team my sophomore year.

What do you do outside of rifle to train and better yourself (workout, meditate, etc)?  Outside of practice, we work out twice a week. I am learning to cook and make a bunch of healthy meals. I also journal to help me reflect on what I learned during practices and matches.

Future plans/goals for rifle and life? When I graduate, I would love to get the chance to help coach my old high school rifle team.

How many hours a day, and days per week, do you practice? We practice air rifle three hours on Mondays and Wednesdays and smallbore for four hours on Tuesdays and Thursdays.

What is a week at college like? My standard week at college is usually practice in the mornings, then I sit for two to three classes a day. When I am not in class, I like to work on homework, study or catch lunch break with my friends. On the weekends, when we are not traveling, I like to watch some of the other Blazer sports we have like basketball, football and baseball.

What other clubs/sports/hobbies did you have in high school? In high school, I was on my school’s varsity softball team as well as a travel team outside of school. I was also one of the heads of the science and history honor societies we had.

Do you have a mantra or saying?  What motivates you? The mantra I like to say to myself is a movie quote my uncle likes to tell me before matches: “Aim small, miss small.” (The Patriot)

What is a travel match like for you? Traveling during a match is always a ton of fun. I love being able to see other ranges at other schools and to meet shooters from other teams.

Advice for new competitors joining the sport. My advice for new people trying to get into rifle is to have fun with it. Try not to compare your progress with anybody else’s. Everyone learns and progresses at different rates, and as long as you enjoy what you are doing, that’s all that matters.

What has rifle taught you? Rifle has taught me patience, resiliency and how to develop a hard-working mindset. What is your major? Why? Favorite class? Economics, because I have a passion for economic theory as it relates to policy. My favorite class thus far has been philosophy of religion.

How old were you when you got involved in rifle? I was 16 when I started shooting.

Favorite rifle (air rifle vs .22) and stage (kneeling, prone, standing)? My favorite rifle is .22. I like shooting all around, but my favorite stage is primarily prone.

What do you do outside of rifle to train and better yourself (workout, meditate, etc)? I do a lot of strength training as well as reading.

Future plans/goals for rifle and life? After college, I would like to get involved in more highpower rifle shooting as well as pistol. What is your major? Why? Favorite class?  I am majoring in International Studies, with a minor in Legal Affairs. One of my favorite classes is philosophy of law, where we debate the logical reasoning behind law making and judicial decisions.

How old were you when you got involved in rifle? I started rifle in high school as a sporter shooter in my junior year. For my senior year, I switched to precision air rifle and picked up smallbore practice on the weekends too.

Favorite rifle (air rifle vs .22) and stage (kneeling, prone, standing)? My favorite rifle is my smallbore .22, and I enjoy kneeling the most.

What do you do outside of rifle to train and better yourself (workout, meditate, etc)? Outside of rifle practice and school, I have a part-time job to keep me busy as well as multiple internships over the summer months.

Future plans/goals for rifle and life? Once I graduate, I plan on moving into a full-time job in international policy work. While I have no plans on continuing my precision rifle career, I do want to help coach at the 4-H level. What is your major? Why? Favorite class? I am a kinesiology major because I would like to pursue occupational therapy. My favorite class has been anatomy and physiology.

How old were you when you got involved in rifle? I started shooting sporter air rifle in 7th grade and moved to precision in 9th.

Favorite rifle (air rifle vs .22) and stage (kneeling, prone, standing)? My favorite rifle to shoot is my air rifle, and my favorite stage is standing.

What do you do outside of rifle to train and better yourself (workout, meditate, etc)? Outside of rifle, I like to swim and hike.

Future plans/goals for rifle and life? I plan to complete my four years as a UAB student-athlete and then go on to a graduate school.