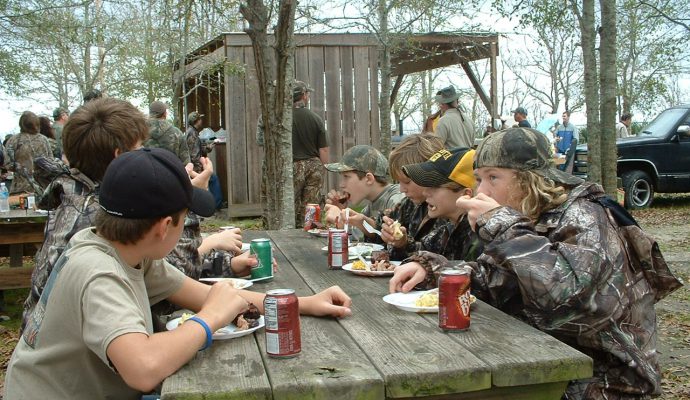 ORANGE BEACH, Alabama – “What better place to hold your firearms training than the beach?”

That’s what Chris Litton said when the idea to create a series of firearm opportunities for kids in his area came to him over a decade ago.

Located along the sugar-white, powdered sand beaches and the crystal-clear water of the Gulf of Mexico encompassing Orange Beach, Alabama, Litton has been highly successful in realizing his dream – assembling a lineup of annual marksmanship events within the City of Orange Beach Club, with plans of expanding his established programs already in the works.

The City of Orange Beach Youth Shooting Sports Program includes a Rifle Shoot, Clay Shoot and a Youth Dove Hunt, as well as an archery event, all of which have all been growing in popularity every year since the installation of the program 10 years ago. The mission of each event is the same – to foster and promote marksmanship safety and awareness through education for youth.

The one-day events are open to children ages 8 to 15, though others may also attend, with approval. With his passion for spreading marksmanship awareness to youth of all ages and backgrounds, Litton has been known to welcome those in their early 20’s who have never fired a firearm before, who are learning just like the smaller children, and even those having trouble paying the small entry fee.

“I don’t turn any kid away,” he said. “I have found that the younger children are going to watch what the other children do, not necessarily what they’re told, and when they see the other kids practicing firearms safety, then they want to be safe as well.”

Litton, the logistics and safety coordinator for the city of Orange Beach, has been fortunate enough to receive bountiful help from area agencies for the programs, including the State of Alabama Department of Conservation Division of Wildlife & Freshwater Fisheries, State Troopers and even the Navy located in nearby Pensacola, Fla.

“We have just about every law enforcement entity you can think of come to help out with these shoots,” Litton said. “It is an awesome opportunity to spend time with and get to know the children as well as an opportunity to reinforce the idea that we are all on the same team.”

Litton has always been a lover of marksmanship and was raised with a deep respect of firearm capabilities. His father, an avid gun collector, taught him safe gun handling as far back as he can remember. When he and his father cleaned guns, his father would explain to him how they worked and how to handle them. His father was so strict about firearm safety, he wouldn’t even let Litton point toy guns at anyone – only his finger.

Litton carried the teachings of his youth into adulthood as he went on to become certified as a hunter education instructor. Also, as a lifelong resident of the Alabama southern shoreline, he saw a lack of hunting interest in the area and, in turn, a lack of exposure to marksmanship fundamentals and safety he felt the community was missing.

“There is a lot of need for children to be exposed to that down here,” he said.

He wanted to give kids the ability to recognize the difference between fiction and reality. He, along with the help of others, began in three-position air rifle courses before moving on to the wider variety of disciplines his program offers today.

“Effectively, what I wanted to do was take away the novelty of the video game,” he said. “I wanted them to realize that shooting could be fun, if done safely and properly, but I wanted them to know that there’s no reset button on the other end if you’re pointing in the wrong direction.”

The rifle shoots he facilitates teach basic fundamentals and marksmanship skills, with hands-on, individual instruction on the firing line. The shoot begins with one type of rifle, a lower caliber, before moving on to a higher caliber. Following in his father’s footsteps, Litton even brings in his personal vintage firearm collection for the kids to shoot on the range.

“We have all types of firearms out there, everything from the old Mosins and Mausers, and Garands and Carbines – you name it,” he said.

Fully-automatic firearms, like a 1927 Thompson “Tommy Gun,” M16s, Ruger Mini-14s and submachine guns with barrel extensions for safety, are sometimes demonstrated at the shoots, and the kids even get one shot with a .50 caliber Barrett rifle – keeping the shell.

“Our main goal, though, is to teach the kids safety, to make them aware that these things aren’t a video game – it’s not a toy. There’s real stuff happening on the receiving end – let them see the power of it,” he said. “That’s something we really push towards.”

He went on, “All that being said, we have a blast … The kids, sandpiper can’t wipe the grins off of their faces … It’s just loads of fun out there.”

The clay shotgun events, like rifle, thoroughly cover the fundamentals before meeting one-on-one with an instructor.

“We start out with easy shots, and then we let the kids do some harder shots, build their confidence as the day progresses,” he said.

He confesses some of the most improvement in the shortest amount of time can be seen during shotgun events, saying, “At the beginning of the day, a lot of the clays survive, while near the end of the day, very few clays survive. They’re tearing them up.”

The Dove Hunt is a day for families, including a pig roast and side dishes – potluck style. The kids get to shoot and learn field etiquette education, while those without parents are provided a mentor so that he or she can still get the experience.

All of the programs conducted by Litton have grown so much, he and the city are currently in the process of building a new range to hold the events. The property, which used to be a hunting site, is large enough to facilitate a temporary range while the rest of the three-phase project is being completed.

“Man, we’ve got some stuff moving – let me tell ya,” Litton said. “The city really supports the program. Our mayor, our council – they’re awesome. They’re all shooters, they all support what we’re doing, 100 percent.”

“Quite honestly, by the time we’re done building our range, it’s going to be a destination for other groups and agencies to do their training around Orange Beach while vacationing,” he added.

Though Litton has been lucky enough to have been presented with an abundance of support in his area, he encourages others to create their own youth programs in their own ways, saying, “Figure out what you want to do. Don’t beat yourself up worrying about every little detail. You do your thing – because your area, where you are, the children you’re working with – it could be a totally different situation than what I’m working with down here.”

There is one detail, however, that he says cannot be taken lightly – those who you choose to help you on the range.

“Make sure you have good instructors who can work with children – that’s the key,” he said. “Sometimes, incredibly gifted instructors just aren’t as effective working with kids.”

“We even have people watching the instructors to make sure they’re not slipping up,” he said.

According to Litton, instructors are so important because they are not only laying the groundwork of fundamentals, but they could also potentially be molding future dreams into the youth who attend the events. The young officers from the nearby Naval Air Station in Pensacola that he recruits to help not only on the firing line but they also set a good example.

“In addition to them being safe firearm handlers, they’re young and they’re pilots and good role models for the kids,” he said.

Orange Beach is a remarkable destination. If you like fishing, shrimping, crabbing, floundering and a place where marksmanship safety begins at the youth level – this place is for you.

If you would like to learn more about the events held in Orange Beach, Ala., or to contact Litton on how you might build your own program in your area, contact him at 251-980-5946 or clitton@orangebeachal.gov. To become a member of the City of Orange Beach Club, the only requirement is to physically help at one of the club’s events as an instructor or in another capacity.