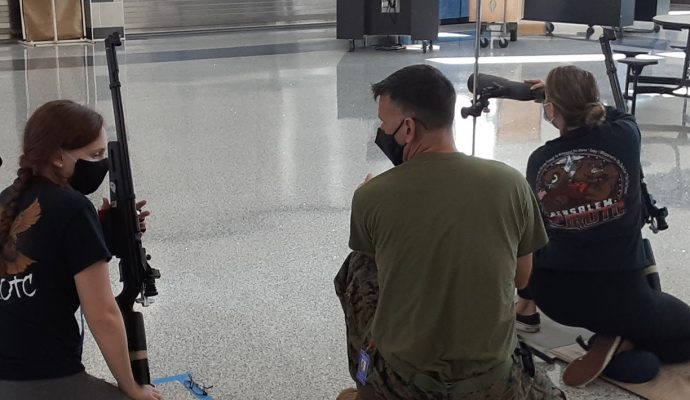 The Civilian Marksmanship Program (CMP) has named the top winners of its fall junior photography contest.

From September to November, junior athletes submitted photos to the CMP that described the impact of marksmanship on their lives, showing a personal vision of its meaning through their lenses. Photos were separated into three different groups: People, Place and Thing. Contestants were able to submit one photo per category for consideration.

Winning overall and earning a featured spot on the cover of the Winter 2020 issue of the CMP’s junior magazine, On The Mark, is Kayley Hullender, 19, of Seaford, Virginia, with her Thing photo submission entitled, “The butterflies are real!”

A member of the Lafayette Gun Club in Grafton, Virginia, Hullender said she quickly snapped the photo of a beautiful blue and black butterfly resting on the swirled wood of her rifle stock (with an engraved CMP logo tucked behind one of insect’s wings) as she was preparing for an outdoor match. She explained, “I thought it (the butterfly) matched the ones in my stomach. I took the photo, and that settled my nerves down.”

Earning second in the Thing category was Devin DePamphilis, 19, of Harrisburg, Pennsylvania, with his photo, “Looking for the X.” DePamphilis is a member of the Palmyra Sportsmen’s Association Junior Pistol Team out of Palmyra, Pennsylvania, and took a minimalist, macro approach to his photo composition. His submission depicted a close-up of a .22 pistol, with a miniature figurine of a man standing near the front sight the firearm, binoculars up to his eyes and concentrated forward.

Describing his work, DePamphilis said, “The photo represents the equipment required for pistol competitions and the constant focus and precision needed to execute your best shot. For shooting, it is practicing the shot process, one shot at a time, until it becomes second nature.”

Andreya Cox submitted a depicting a medley of modeled air rifle essentials such as lead pellets, a bipod and target faces, that she calls “a collage of my shooting career.” The photo earned third overall in the category.

Cox said the targets represent her “heartfelt memories of being on this team and competing with my family,” while the pellets represent past and future competitions. She also gave gratitude to her bipod, saying it “carries the rifle when I’m done with shooting, and for that, I am very thankful.” Shayna Sit, 17, of Bensalem, Pennsylvania, earned fourth in the category after portraying a hole-filled cardboard backing of a target box frame, damaged from air gun lead pellets. Sit, who competes on the Bensalem High School team, described her photo by saying, “Wood chippings and chunks fly off of the target box when a junior marksman first learns to shoot. With more practice, the lead pellets no longer attack the wooden frames. The target box remains forever scarred from undergoing the wrath of a developing junior marksman.”

Another Bensalem High School athlete, Kaitlyn Robinson, 17, submitted a photo for the Place category of her school’s cafeteria, where the MCJROTC cadets practice each day – moving desks to make room for their range setup after class lets out. Robinson said, “This image represents the lengths these cadets will go to shoot. They clear the cafeteria quickly and efficiently, working together as a team. Working together allows the team to become closer, which has led to each of them helping one another on and off the firing line.”

Earning the top photo in the People category was Mohammad Kafya, 17, also of Bensalem High School, with his photo showing the relationship between advisor and athlete. In his photo is MSgt Shawn Worthen, Bensalem’s USMC (Ret.) Marine Instructor, who assists a young shooter with improving her kneeling technique.

Describing his work, Kafya said, “This powerful image represents the bonds built by an emerging shooter and her Range Officer – even in a pandemic. This photo also emphasizes mentorship and the nature of shooting coaches and teams as caring and patient instructors charting a path for shooters on the journey to becoming a better and stronger shooter.”

Second place went to Andreya Cox, 16, of Jonesborough, Tennessee. A member of the Daniel Boone High School Rifle Team, Cox snapped a shot of team captain and senior athlete, Olivia Lusk, as she gazes through the sights of her air rifle. Cox credits Lusk for her support from the beginning of her career as well as for coaching, teaching and motivating the team when they needed it most.

Cox went on to praise her teammate, saying, “I am very thankful to be able to work alongside such a great friend, competitor, coach, teacher and captain. I wanted her to be the star of the photos … she deserves the attention and praise as she leaves us for greater things in her future.”

Self-portraits were sent in for the People category as well, including Claudia Muzik, 14, of Green Springs, Ohio, who is a growing air rifle competitor that has regularly attended events at Camp Perry’s Gary Anderson CMP Competition Center since she was nine, along with Caymen Barron, 16, of Sylacauga, Alabama, who is dedicated to shotgun training.

Barron is a member of the Red Eagle Gun Club in Childersburg, Alabama, where he practices Skeet, Trap and 5-Stand shooting. He has also been involved with the Talladega County 4-H Club and the Sylacauga Shooting Team. At Red Eagle, he assists with range duties, pulling and cooking for regulars. Competing all over the state has given Barron the opportunity to get to know many well-known athletes in the sport of shotgun and has also helped him advance to competitive levels he would not have otherwise achieved. His submitted photo is from the 2019 State 4-H Tournament at Red Eagle.

Thank you to all of the talented young athletes who participated in this fun and inspiring contest!