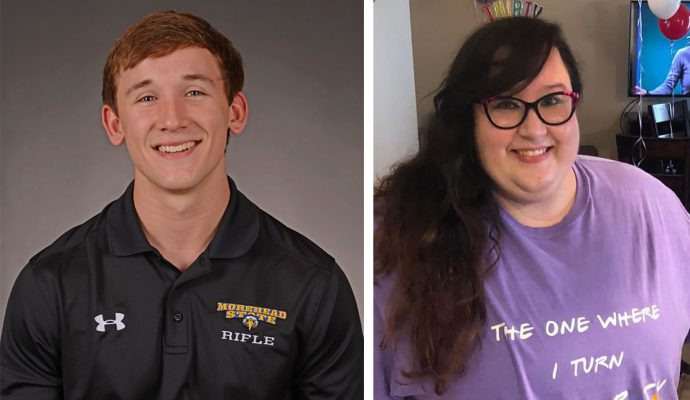 The Civilian Marksmanship Program (CMP) would like to introduce two new employee titles taking effect in 2022. Catherine Green, who has been with the CMP for over a decade, will be assuming the role of North Range Coordinator – overseeing all competitions and events held at the Gary Anderson CMP Competition Center in Ohio. Likewise, the CMP would like to welcome newcomer Ryan Hinson, who has accepted the Junior Rifle Camp Coordinator position. Hinson will coordinate the CMP’s annual air rifle and smallbore camps, held all summer long for high school-age athletes.

The roles were filled after preceding range coordinator and camp director Chance Cover made the move to the Olympic Training Center in Colorado Springs as a resident athlete. The CMP wishes Chance all the best as he works toward his own marksmanship ambitions.

Catherine Green began with the CMP as a Junior Rifle Camp counselor, working summers from 2011 to 2014, before coming on full time as a program coordinator in 2015.

As a junior, Green shot for the Newport Rifle Club in Middletown, Rhode Island, and was coached by Michele Makucevich and Dan Nagelhout. She participated and placed well in many matches, including the Camp Perry Open, U.S. Army Junior Championship and CMP/NRA/USA Shooting 3P National Championships. Green’s most notable win from her high school career was the 2010 American Legion Championship. Before graduating, she earned her Junior Distinguished Badge in air rifle. Green went on to become a member of the Texas Christian University (TCU) rifle team from 2010 to 2014 and won a NCAA National Championship along with her teammates in March of 2012. The following month, Green was crowned the 2012 Air Rifle and Smallbore Junior Olympic Champion. Throughout her collegiate rifle career, she received All-American honors and was a central athlete to her team in both air rifle and smallbore. Green graduated from TCU in 2015 with a bachelor’s degree in Art Education.

“I am so delighted for my new role at CMP as North Range Coordinator,” Green said. “I shot on this range as a junior in 2009, right after it opened, and many more times over the years for Camp Perry Opens, National Championships and Olympic Qualifiers. I’ve seen the air gun building change over time, and now to be able to coordinate events and matches here to help facilitate positive memories like the ones I have is so exciting.”

Ryan Hinson is a recent graduate of Morehead State, where he was a member of the school’s rifle team all four years. He began his career as a freshman in high school at Ridgefield in Washington. As a junior, he competed in such events as the Junior Olympic Championships and the 2016 Winter Airgun Championship.

As a freshman at Morehead, he was named Second-Team and OVC (Ohio Valley Conference) All-Newcomer for air rifle. He was the second highest scoring competitor on the team his freshman and sophomore years before moving on to be tied for team-best average score in smallbore – the same year he moved up to First-Team All-OVC. Excelling all around, Hinson was also a multi-time CRCA (Collegiate Rifle Coaches Association) Scholastic All-American.

While in college, Hinson worked as a CMP Junior Rifle Camp Counselor for two summers, in 2018 and 2019. He also served as an assistant director during the summer of 2021. “First of all, I thank and acknowledge Chance for the great work he has done to advance the camp curriculum and improve the experience for our athletes,” Hinson said. “As the new Junior Rifle Camp Coordinator, I hope to continue improving this content and experience for everyone involved. This not only includes teaching the most relevant and important information to our junior athletes and coaches, but offering an unparalleled experience for our camp counselors.”

“There are many different avenues to explore in doing this, but I look forward to bringing a fresh perspective and new ideas to the table in order to make camps the best they can be,” he added.