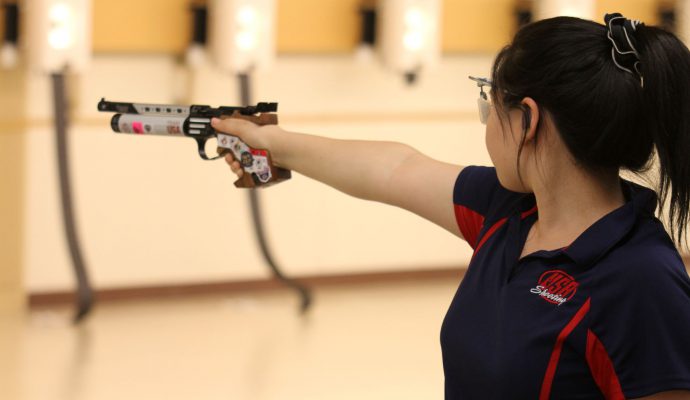 COLORADO SPRINGS, Colorado (April 24, 2019) – On the day in which USA Shooting asked the shooting sports community to help Raise The Flag, Junior Olympic athletes provided a glimpse of a strong future in Air Pistol, Sport Pistol and Paralympic Rifle.  Sarah Choe, Ryan Yi and Stetson Bardfield are the latest athletes to be crowned 2019 Junior Olympic Champions.

Choe (Los Angeles, California) repeated her Junior Olympic title from a year ago in Women’s Air Pistol, leaving nothing to chance and earning that title before the event Final even began with a two-day Qualification total of 1122 (out of a possible 1200), which was 12 points higher than the nearest competitor. That would prove to be a good thing as she finished third in an action-packed Final that starred a 12-year-old pistol dynamo.  Finishing second overall and earning her USA Shooting Team jacket would be Maria Tsarik (Lake Bluff, Illinois), with Ada Korkhin (Brookline, Massachusetts) coming in third.

There was a lot of Yi on the USA Shooting pistol ranges Wednesday, as in the Yi siblings (Diamond Bar, California) and the three medals they walked away with including the title by Ryan, the top J2 (age 15-17) result by Angela and the top J3 (ages 14 and younger) result by Annabell. It was 12-year-old Annabell giving the crowd something to talk about during and after the Women’s Air Pistol Final. She’d finish fourth overall, but she’d take home a dramatic win in the Final, beating the eventual champion.  She did so by climbing out of the sixth-place position, which is where she was at after the first 12 of 24 overall shots.  An 8.6 on her 13thshot had her on the verge of elimination, but then she started to turn it around and climb up the standings.  She did so behind the power of shooting 10.1 or higher on all but three of her last 10 shots, including three of four shots at 10.8, 10.7 and 10.8 on a 10.9 scale.  It would be an impressive feat for any shooter, let alone someone 12 years old.  In that same 10-shot span, the three overall medalists combined for just seven shots of 10.0 or higher, equaling the same mark as Annabell hit. Ryan Yi is the Sport Pistol Junior Olympic National Champion at the age of 16, after having the highest Qualification score and then winning the Final. Ryan finished fifth overall earlier in the week in Air Pistol while winning the J2 division.  Finishing second and earning his second podium on the week was Paul Kang (Los Angeles, California) and Luke Simon (Fargo, North Dakota) finished third to earn his USA Shooting Team jacket as well.

Stetson Bardfield (Colorado Springs, Colorado), who helped fight for Paralympic participation at the National Junior Olympic Shooting Championships (NJOSC) two years ago, is the champion in the SH2 Paralympic Mixed Prone Air Rifle event.  In 2018, he competed against two others and this year the event featured eight athletes, showing the welcomed growth in the Para division. Finishing second was Madison Champion (Greenville, North Carolina), who won the standing event earlier this week while Gracie Hoyt (Mullen, Nebraska) earned the bronze medal after finishing second in standing.