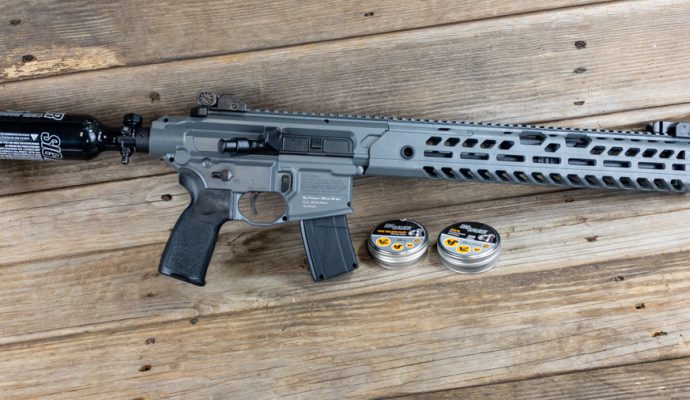 The folks at Sig Air have been busy with a constant stream of CO2 pistol and BB offerings. Then came the innovative break-action ASP 20 with its novel barrel lockup design. Oh, then they decided to get into the Airsoft business. That stings by the way – if you’re wearing snug clothing. Now, it’s time for a pre-charged pneumatic (PCP) line and the company’s first offering is classic Sig.

The Sig Sauer MCX Virtus PCP air rifle looks just like it’s louder and “many more foot-pounds” centerfire sibling, with one visible difference – the receiver extension tube is a shade portlier. That’s because the air-powered Virtus uses buttstock real estate to store its 3,000 pounds per square inch air reservoir. As with the classic AirForce rifles, this design makes sense as that area is otherwise wasted space. It doesn’t hurt to have the weight of the air cylinder closer to the shoulder anyway – you don’t have to support it hanging way out front by the muzzle.

The Sig Air MCX Virtus feels like a semi-automatic, and it (sort of) is. And it’s (sort of) a double action. As Austin Powers might say, allow myself to explain myself. The trigger advances the 30-round pellet belt inside the removable magazine, but you don’t really feel it. The rifle also re-cocks itself semi-automatically between shots, so each trigger press launches about 12-foot-pounds of pellet joy down range. So, technically, since the trigger does two functions (advance the belt and release the shot) it’s a double action. Also, technically, the action resets itself using energy from operation of the system, which is kind of the definition of semi-automatic. You decide how you want to describe it.

The Air Virtus feels legit. The centerfire model weighs in at 7.9 pounds unloaded. This one tips the scale at 7.5 pounds. That’s a good thing. If you’re going to practice your tactical carbine skills on the cheap, it should feel as authentic as possible. The overall length is 37.5 inches and because of the air cylinder stock assembly, that’s what you get – you can’t adjust the length of pull as with a standard collapsible stock.

The MCX Virtus is a .22-caliber rifle that operates in the 12-foot-pound power range, depending on the pellets you choose. The magazine drops as you’d expect but operates with a twist. A trap door on the magazine itself opens a compartment that houses a 30-round re-usable belt. Just pop a pellet into each pocket, seat it with the included multi-tool stowed in the pistol grip, and feed the belt back into the magazine. The removable belt makes loading a lot quicker and easier. Each pellet pocket is deep, so you shouldn’t have any problem using a variety of pellet weights that vary by length – within reason.

The Virtus arrived in three pieces, neatly packed. You assemble the air cylinder, buttpad, and stock by hand and tighten with the same multi-tool previously mentioned. This design allows you to stock up on a few cylinders and swap them out as needed if you don’t want to travel with a compressed air supply.

After assembling the MCX Virtus, I filled the air reservoir using an Air Venturi Nomad compressor. The cylinder arrived close to empty, so it took me about seven minutes to fill it to 3,000 psi. Subsequent top-off fills should only take a few minutes. The cylinder uses a foolproof Foster fitting (thanks Sig!) and has a small, but accurate manometer so you can monitor remaining air pressure.

I loaded it up with Sig Sauer Crux lead and ballistic alloy pellets for some offhand shooting in the garage. Don’t tell the neighbors. Operation was smooth, and I measured the trigger pull weight right at 5.5 pounds. The double-action function didn’t add any undue weirdness to the trigger operation – it felt like a standard service rifle trigger. Firing, so far, has been completely reliable and I haven’t run into any feeding issues. The magazine advances as it should between each shot. The MCX ships with flip-up iron sights, with the rear having two aperture sizes. I’ll mount a scope on the full-length top rail at a future date for formal accuracy testing. For now, let’s say I’m happy with the results using the irons. It shoots where you point with perfectly acceptable accuracy.

I broke out the new FX Airguns Pocket Chronograph to check velocity of the first two pellet types tested. This nifty little radar device hangs from the muzzle and couldn’t be simpler to operate. As it captures readings, it beams them back to a companion smartphone app for viewing, calculation and storage. The Sig Air Crux lead pellets averaged 591.5 feet per second, yielding 11.39 foot-pounds while the lighter ballistic alloy versions clocked in at 760.3 fps for 12.88 foot-pounds. Those figures are right in line with what Sig claims on the box.

If you’re an AR-type rifle aficionado, this PCP rifle is for you. It handles well, shoots reliably, and makes a great training rifle you can use in the garage or back yard. I’m glad to see that Sig chose .22 caliber for the initial release as that also positions it well for an effective small game and pest control solution too. Neat stuff…