You are here: Home / Features / Can You Really Shoot an Airgun in Your Backyard? 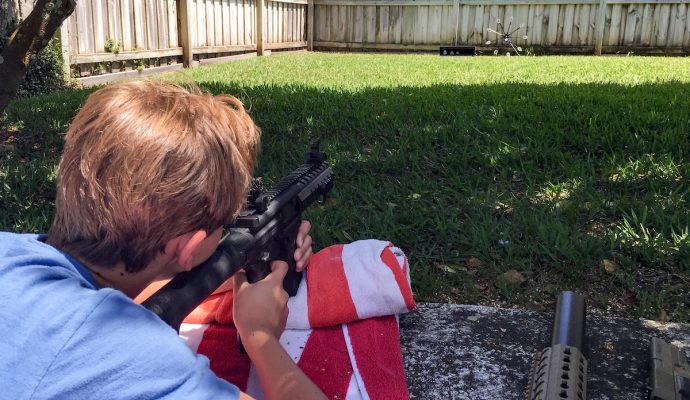 “Shoot right in your backyard” is one of those phrases we’ll toss about until the sun goes out.

Common sense would dictate you make such a decision with care. For example, I live in a suburban neighborhood, so the prudent airgunner wouldn’t be lobbing .30, .45 or .50 caliber slugs on the quarter-acre expanse. On the other hand, one of my favorite plinkers for close-range application is the Gauntlet chambered in .177. While all safety rules still apply (it WILL put an eye out for sure if used carelessly) the light five to nine-grain, give or take, pellets aren’t going to travel very far should they escape the constraints of a safe backstop. Heck, a .177 rifle or pistol can be used safely indoors too. If Olympians and CMP competitors do it, I figure I can too.

But what about actual laws? Living in the land of the (mostly) free, we’re not accustomed to seeking permission for recreational activities on our own property, or in our own homes, but humor me for a second. Whether one cares or not, it might be interesting to see what the legislative tyrants have come up with.

I checked a couple of different sources.

There is a site on our internet — AirgunLaws.com — offering convenient, understandable language summaries of state and local laws across the country. It’s a great resource to use as a starting point. As a side note, they’ve also done a nice job of summarizing airgun hunting regulations for most states. If you need to know obscure rules like minimum calibers for certain game types, you can find out here.

I checked the South Carolina listing and quickly discovered the state frowns upon airgun use in parks under the jurisdiction of the South Carolina Department of Parks, Recreation and Tourism. Other than that, the state doesn’t have much to say on the matter other than you really ought not be committing other crimes while carrying an airgun. Sounds like they simply lumped airguns in with standard firearms for that one. The site lists ordinances for many cities in my state too, but there was nothing additional to glean.

However, as even they say on the site, you are ultimately responsible for knowing, understanding, and following whatever laws the political hacks come up with, so always verify by going straight to the source.

Based on my initial looks, I figured the most likely candidate to put the ixnay on my home airgunning would be my town itself. I live in a moderately-sized town outside of what most would describe as a mid-range city. The municipality is large enough to have its very own town council, so, yes, there is a published Code of Ordinances.

My hopes escalated ever-so-slightly after searches for terms like “airgun” and “pellet” yielded null results. However, being thorough, I next searched for “firearms” and found several hits. And there it was in section 132.21, Division (A)…

It shall be unlawful within the municipality, subject to the exceptions stated in division (B) below, to discharge firearms, air rifles, and other weapons or instruments which discharge projectiles.

Division (B) referenced above made exceptions for shooting ranges and properties larger than 300 acres, so no joy.

The more you know. Be sure to check such things before building that backyard range…