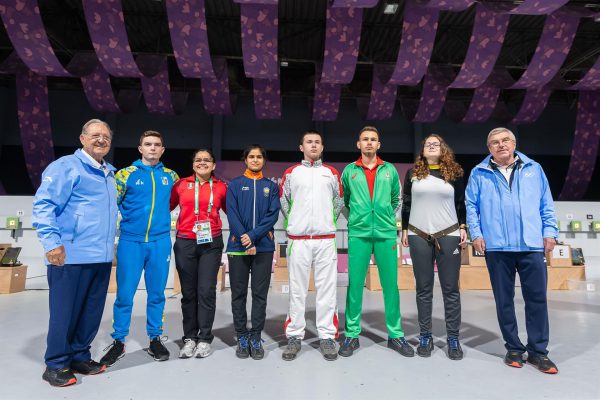 Buenos Aires (ARG), 12 October 2018 – Bulgaria and Germany climbed together atop the podium at the Buenos Aires 2018 Youth Olympic Games, where they secured the gold medal in the 10m Air Pistol Mixed International Team event.

Vanessa Seeger and Kiril Kirov — who respectively placed 10th and 11th in the Air Pistol individual events — dominated the gold medal match, signing a clear win and securing the brightest medal with the score of 10 points to 3. The international couple prevailed over a team composed by India’s Manu Bhaker — gold medalist in the 10m Air Pistol Women event — and Tajikistan’s Bezhan Fayzullaev, who eventually landed in 2nd place and won silver.

“It was an honour only to be here, not everybody gets this chance, and to win the gold is a fantastic feeling,” said Kirov after the medal ceremony. “I really like this mixed event a lot, it allows you to recover from a bad shot thanks to the point-system and it’s enjoyable to watch.”

“I feel relieved! I wasn’t very happy about my individual event,” added his German teammate. “I still cannot believe what happened. We had two strong competitors and I’m so glad we made it, my partner was amazing and we did a great job together.”

“We’ve been a little bit lucky during the match, because our bad shots came at the same time so they didn’t affect our performance, in the end it was a great day and I’m feeling great!”

“I was happy to be teaming up with Bezhan, I never met him before and we made it together all the way to the gold medal match,” declared Manu Bhaker. “I enjoyed this event, even though I haven’t performed that well I liked it a lot.”

The bronze medal match went in the books with another resounding victory, as Ukraine’s Dmytro Honta and Mexico’s Andrea Victoria Ibarra Miranda beat Iraq’s Fatimah Abbas Waheeb Al-Kaabi and Belgium’s Jerome Son with the score of 10 points to 4.

In the two semifinals that determined the medal matches participants, Bhaker and Fayzullaev beat Honta and Ibarra Miranda by 10 to 3, while Kirov and Seeger bested Al-Kaabi and Son with the score of 10 to 6.

Even if there is no official medal table, seven nations climbed on the podium in individual events: Denmark, Georgia, India, the Republic of Korea, the Russian Federation, Serbia and Switzerland.