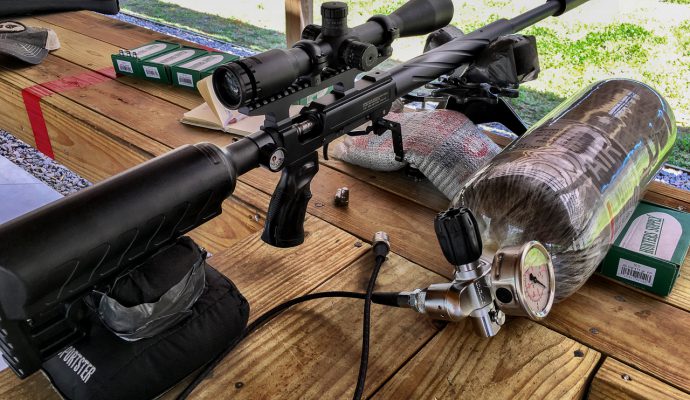 That’s not a sound generally associated with airguns, now is it? However, it was precisely that noise that had the whole rifle line laughing hysterically at my local range recently. I was there lobbing large lead slugs with the Gamo TC-45 big bore air rifle. Initially, the space-age looks and shockingly quiet operation (compared to the fire and brimstone boomers) commanded full attention from the range crowd. What made them giggle was the sound of 411-grain lead slugs (would those be classified as bricks?) hitting the 100-yard berm. Thud. Imagine the sound of whacking a sofa cushion with a shoe; then you’ve about got it.

The first thing you’ll notice about the Gamo TC-45 is its long and slender contemporary appearance. As the air reservoir doubles as a buttstock, there’s no bulk up front in the handguard area. In fact, the spiral-fluted guard is a bit under 1.6 inches in diameter. Forward of that is a segment of exposed barrel capped with a permanently attached sound moderator.

As a single-shot design, the receiver is also minimalist. Even the cocking lever doubles as a trigger guard, so there are no other protrusions except the Foster fill port on the left and pressure gauge on the right, just behind the receiver.

The trigger is two-stage and adjustable to preference. I didn’t mess with it, but if you want to, you can. Above the receiver is a 9.5-inch rail segment, placed high enough to give you proper eye positioning when using the air cylinder buttstock as a cheek rest. I mounted a Hawke Optics scope using low rings, and the height was perfect relative to my natural eye position.

The 480cc carbon fiber air cylinder housed under the buttstock comb can handle up to 250 bar. That’s a hair over 3,600 pounds per square inch. As this rifle is designed to shoot a wide variety of .45 caliber projectiles (one of the reasons for its single-shot design), it likes to have lots of air at its disposal. Depending on shape and weight of your projectiles, you can get maybe five full-power shots per fill and stay consistent enough with the resulting velocity to keep on target. Bottom line: you’ll want either a compressor or reasonable capacity air cylinder to keep this beast topped off. You can pump it up by hand if you wish but you’re going to burn a few billion calories. In the name of science and honest reporting, I did just that but lost 17 pounds in the process.

I wanted to test a variety of “pellet” types with this rifle, so I called the folks at Hunters Supply. In addition to making lots of lead projectiles for centerfire and muzzleloading rifles, they make a variety of pellets and slugs optimized for airgun use. I got my hands on several different .45 caliber projectiles, all of which measured .457 inches in diameter. Their weights ranged from 138 to 411 grains. That’s an extreme spread, so I started with some velocity measurements using a chronograph placed about 15 feet down range. I shot multiple times with each projectile type and averaged the results.

So what does that velocity and projectile weight combination do for you regarding energy on target? Let’s find out.

Using those velocities, I calculated the actual kinetic energy of each projectile type.

According to Gamo, you can break the 400-foot-pound barrier with 350-grain cast bullets. I didn’t have any pellets (bricks?) of that weight, but given that I was rapidly approaching that energy number with both lighter and heavier slugs, I believe it. 350-grains must be the sweet spot in the weight vs. velocity balancing act.

While some of the lighter “pellets” will extend useful range out to 100 yards, I did accuracy testing at 50. I also fired three-shot groups as the velocity starts to taper off after that and shots four and five would almost always print a bit lower on the target due to velocity loss. Those last shots were still perfectly usable for hunting purposes, but I was trying for small group size, not “minute of beast” accuracy.

At appropriate ranges given the energy level of the various loads, it’s plenty accurate enough for hunting use. Those big, fat slugs will take down most four-legged creatures, and there’s enough shot capacity to give you some backup for a miss or follow up shot. List price on the TC-45 is $995.95.