You are here: Home / Airguns / Benjamin’s Muscular and Hefty Bulldog 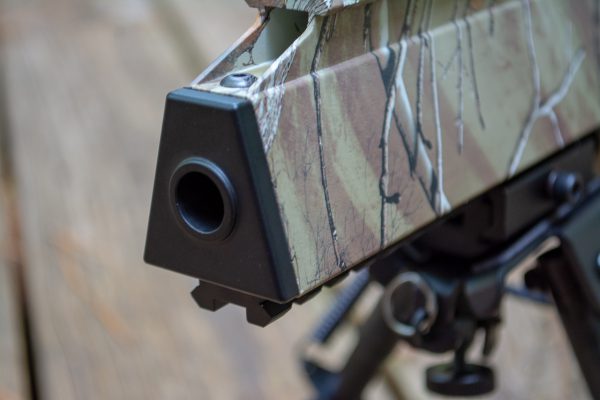 First, I should note that what you see in the photos here are from the Benjamin Big Game Hunter Pack configuration. That includes the rifle with a special camo finish, a bipod, a 4-16x scope, a box of Nosler .357 Ballistic Tip eXtreme bullets, and even a nifty carrying case. You can also buy the base rifle without all that if you want to choose your own accessories. I should also note that the model shown here is the spiffier Realtree Xtra with camo finish. If you want to save $50 give or take, you can get it in basic black too.

The Benjamin Bulldog is a .357 caliber PCP (pre-charged pneumatic) air rifle. If you’re new to the airgun thing, PCP means that the rifle has an onboard air tank that packs enough pre-compressed air to fire multiple shots. You don’t have to “charge it” with air for each shot, however, just as with any other rifle, you need to cock it to reset the action. While we’re talking about that, we ought to mention that the Bulldog is a Bullpup design, meaning much of the action is placed far back in the stock. To cock the Bulldog, just swing the cocking lever out from the side of the buttstock. It’s ambidextrous, so you can easily move it to the other side.

While we’re talking about attributes related to its short and handy Bullpup configuration, the five-shot rotary magazine rides in the upper part of the buttstock, just four inches from the buttpad. Since all the moving parts are in the stern that means you can have a full-length accessory rail all the way down the top of the rifle. The rail on the Bulldog starts right in front of your nose and continues about 26 inches until it ends just short of the muzzle. There’s plenty of room for a traditional scope, forward-mounted scout scope, lights, lasers, or electric chainsaws if you like. Up front, there’s a five-inch rail segment on the bottom. That’s the perfect location for the included bipod in the Big Game Hunter Pack. The Bulldog also has sling swivel attachment points fore and aft.

Speaking of that full-length stock, it not only covers the shrouded barrel but the tubular air cylinder too. The  340 cc reservoir holds 3,000 pounds per square inch of lead slug-flinging air and you’ll get about ten good shots before needing to top off your air supply. On the right side of the stock, just forward of the cocking lever, is an easy-to-read manometer (pressure gauge) so you can keep track of your status when in the field or recharging. The fill port is just below that, under the buttstock. It’s a Foster connection covered by a plastic snap-on door so it doesn’t catch on stuff while in use.

For science, and because I’m particularly dedicated, I filled the Bulldog with a hand pump a couple of times to see what it took to satiate this hungry beast. The rifle arrived near empty, so the initial fill took some work–about 300 pumps. Don’t let that scare you. Once there’s air in the reservoir, you’ll never run it down to empty again. After your 10 full-power shots, you’ll be in the 2,000-psi vicinity. To top off the tank from there back to the full load of 3,000 psi requires about 100 pumps.

Or better yet, you can ditch all that manual labor and get yourself a companion 15-inch PCP Charging System air tank. Once you get that filled at your local dive shop or paintball center, it’ll recharge your Bulldog from 2,000 to 3,000 psi about eight times. It’s small and light enough to take to the range without inducing a hernia. Highly recommended.

Shooting the Bulldog is easy. The rotary magazine lifts straight out of the stock when you retract the cocking lever. Just drop five (or fewer) pellets into the spring-loaded magazine and replace it. Feeding was smooth and snag free; I had no hang-ups or jams in the reloading process. The safety lever is a vertical bar just in front of the trigger. When in the rear position, the trigger is locked. Just push it forward when you’re ready to fire.

I did all my shooting using the Nosler Ballistic eXtreme bullets. They’re 145-grain lead slugs and as the name implies, feature a polymer ballistic tip to aid aerodynamics and potential expansion. I chronographed these and measured an average velocity of 755.2 feet per second for 183.7 foot-pounds of muzzle energy. Accuracy was peachy with a 1.52-inch group at 50 yards, so I put targets at 100 yards as well. That group was interesting. Five shots went into a four-inch horizontal group. The vertical dimension was less than an inch, so given the windy conditions, I suspect most of that four-inch horizontal measurement was wind induced.

This is a seriously fun rifle. I like the caliber choice because it offers big bore performance yet doesn’t suck air like a politician on the witness stand. I think 10 good shots is a good sweet spot that balances power and convenience. Go bigger and heavier and you quickly get into “less than five” shot territory before things get weird with the velocity and subsequent accuracy. MSRP on the standard model is $849.99. The Realtree version lists at $899.99 and the Big Game Hunters Pack shown here is $1,199.99. Oh, and one last thing. Bulldogs are well-known for their ability to get along with others, so no worries about adding one to your airgun collection.