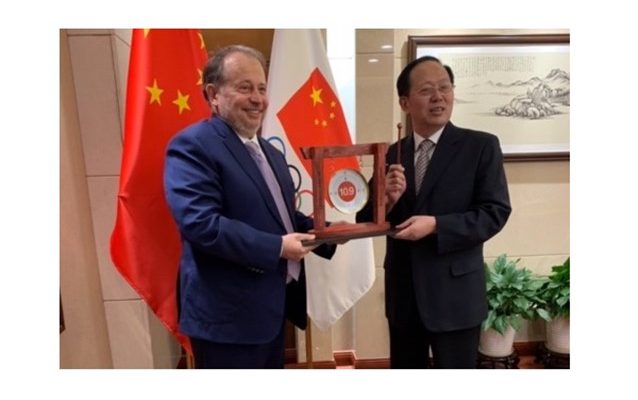 The first Gold medal was won by Russia’s Yulia Karimova in 10m Air Rifle Women. The two Quota Places for the Tokyo-2020 Olympic Games in this event went to Najmeh Khedmati from Iran and Anna Nielsen from Denmark.

CCTV, the National TV Company, together with the ISSF Production Team are broadcasting live. It is expected that in China alone the TV audience will reach nearly one billion viewers. TV rights were also obtained by TV companies from many countries around the world. It will also be possible to follow the progress of competitions on all digital platforms.

The ISSF President who took part in the Opening Ceremony and presented the first 3 medalists with their medals, had a meeting with Mr. Zhongwen Gou, Minister of Sports and President of the Chinese Olympic Committee.

Among the topics of the discussion were such matters as a reconstruction plan of the Olympic shooting centre in Beijing, future possibilities to hold ISSF competitions in China, testing the quality of TV production coverage and the debut of a new format of the Mixed Team events with Medal Matches.  The ISSF President supported the idea of creating an ISSF Education Centre in China.

The meeting was deemed to be both friendly and constructive, and was also attended by Mr. Chun Liang, President of the Chinese Shooting Association and ISSF Administrative Council member.