You are here: Home / Features / Backyard Plinking on a Budget with the Browning Buck Mark URX by Umarex 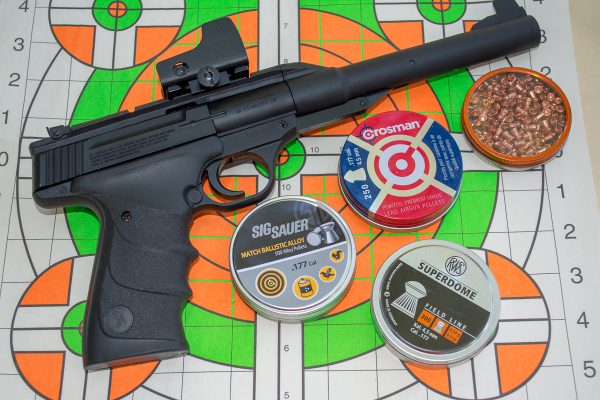 Last week we took an up-close and personal look at the Gamo Urban 22 PCP air rifle. While it offers greatly expanded safe shooting opportunities over those presented by centerfire guns, it still packs some punch by flinging .22 caliber pellets at velocities up to 900 feet per second. This week, let’s consider a pistol that brings the power level way down – on purpose – so you can safely shoot for practice or plain old fun just about anywhere. It’s the Browning Buck Mark URX by Umarex

The folks are Umarex are always busy making all sorts of airguns. Some they create based on licensing agreements with other gun manufacturers, such as the one we’re covering today. Others like the new .50 caliber Hammer are offered as unique Umarex-branded models.

At first glance, the Buck Mark URX looks like the rimfire version of the classic Browning target, hunting, and plinking pistol. When you pick it up, only then will you notice the blend of polymer and metal construction that make this an affordable and simple-to-operate break-barrel air pistol. Like its fire and brimstone breathing cousin, it’s about 12 inches long overall and has a thick bull barrel. Technically speaking, this one has a thin internal steel barrel surrounded by a larger polymer shroud to produce the bull-barreled appearance.

It’s a .177 caliber pellet gun that claims velocities in the 320 to 360 feet per second range depending on whether you use lighter alloy projectiles or heavier lead ones. Each cock of the spring-piston gives you exactly one shot, so it’s a great model for beginning air gunners and kids in the earlier stages of learning safe gun handling. While it’s a full-sized pistol with a 5.25-inch rifled barrel, the grip is slender enough to accommodate smaller hands. It also has a positive safety which can be engaged during the cocking and loading operations. The safety is also automatic, so if it’s off, it still engages each time you cock the Buck Mark URX.

The “iron” (polymer) sights are fixed in the front and adjustable for windage and elevation in the back so you can tweak them to your preferred pellet type and weight. Because the URX has a rail on top, I decided to mount a Burris FastFire 3 Red Dot Reflex Sight. Because, why not? And fun.

I checked the velocity of a few pellet types using a Shooting Chrony Beta Master Chronograph placed about 10 feet in front of my shooting position. Here’s what I found.

I did notice that the Crosman Pointed Premium grade pellets had a tighter fit in the chamber than the Gamo PBA pellets, so that might explain the significant velocity difference between the two similarly weighted projectiles.

For better accuracy testing, I mounted the Burris FastFire 3. My eyes ain’t getting any younger after all. The FastFire red dot sight comes in your choice of 3 or 8 minute of angle dot size. The one I had lying around the office was an 8 MOA model which was appropriate for this use. We’re not talking about an Olympic target pistol here, so the larger, easier to see, and faster to acquire dot isn’t going to have any negative impact on your shot precision. I set up targets at a distance of 10 yards and shot some five-shot groups with the same pellets I used for velocity testing. Here’s what I measured for center-to-center group sizes.

I didn’t re-zero the Burris FastFire 3 for each type of ammo, and as you can see from the target photo, all four types we tested were fairly close regarding the point of impact on the target. I zeroed the optic with the Sig Sauer Match Ballistic Alloy ammo, so in comparison, the other ammo types had a very slight tendency to impact a bit to the left and a bit higher than the Sig pellets. If your targets are tin cans, I wouldn’t worry too much about adjusting sights when you change pellet brands. You certainly can adjust the iron sights to match your ammo if you like.

As for general shooting and handling impressions, the Buck Mark URX feels good in the hand. The grip panels are made from a rubber-ish material with mild texturing, so they’re not only comfortable; they don’t slip either. The grip does have finger grooves. I like those, but I realize some don’t. Just be aware that this air pistol has them in case you care about such details.

Perhaps above all else, here’s what makes this little pistol a backyard beauty. It’s quiet. Really, really quiet. I shot it side by side with a couple of different CO2 pistols and the noise level difference was stunning. By far the loudest part of the noise signature was the pellets impacting the target. If you use a quiet backstop, you won’t be upsetting the neighbors.

The trigger is a bit heavy – I measured the pull weight at 6.5 pounds. Like the rimfire Buck Mark pistols, it’s got an aggressive crescent shape and it’s a hair too small to get my size large finger in there comfortably. As I nitpick about some of these observations, I have to remember the price point of this fun little pistol…

The retail price is just about 50 bucks depending on where you shop. As a break-barrel, there’s no need for any type of air supply system or even CO2 cartridges. All you need to buy are pellets. No fuss, no muss, no ongoing cost to shoot. Sweet.