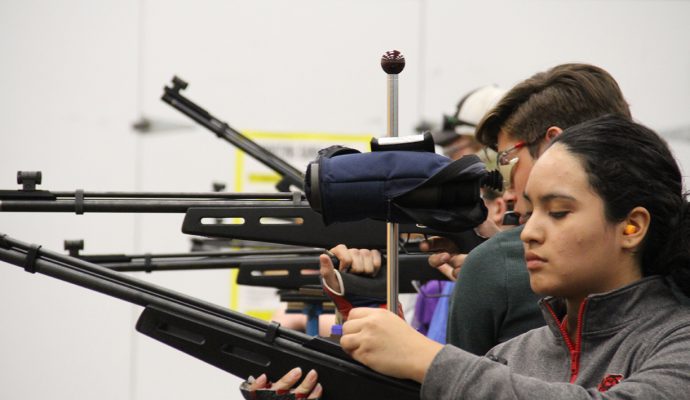 Gary Jobe has been essential in building youth marksmanship programs in the south. Serving as CMP’s Arkansas State Director for over 15 years, Jobe uses his title to learn new strategies for implementing an assortment of programs for youth who are only beginning to recognize their passions – constantly evolving to the budding needs of young marksmen in his state.

“I have enjoyed being a CMP Director for the exposure it has given me in a variety of shooting disciplines,” Jobe said.

He admits that before he became a State Director, he didn’t have much knowledge of competitive shooting programs, like three-position (3PAR) air rifle and pistol.

“As I have become familiar with these programs, it has given me an opportunity to promote and share these programs with others and expand shooting opportunities in Arkansas,” he said.

One of the programs Jobe has cultivated out of an emerging need is BB gun – an endeavor that has become an important area of youth marksmanship development in Arkansas.

Jobe and his son, Justin, were involved with various youth shooting programs in Texas, where Jobe owns a second home and a ranch.

When he arrived in Arkansas in 1996, he found very little being offered on a local level for youth marksmanship, so he took it upon himself to help organize a homegrown program within the Ozark Youth Shooting Team from Bentonville, Arkansas.

The main purpose of the program was to conduct activities known as the Youth Hunter Education Challenge (YHEC) – an activity introduced by the National Rifle Association (NRA).

The ages of those participating in YHEC had to be at least 11-12 years old, yet Jobe noticed many families in the program had younger children, in the 8-10 year range, interested in firearms as well.

“I decided to start a basic BB Gun Program in 2000 to give these youth something to do while their older brothers or sisters were shooting,” Jobe said. “The BB gun program also provided gun handling and gun safety training for these youth as they aged into YHEC.”

After only a few years, in 2004, the BB Gun program became well established and took on a following of its own – assembling over 25 teams statewide.

Jobe went on to host the Arkansas State BB Gun Championship, beginning in 2006 and asserting itself over the last 14 years as a major competition attended by as many as 175 competitors. High scorers of the State event advance on to the Daisy National BB Gun Championship, also held in Arkansas.

With a new necessity of building an air rifle program came new challenges – the need for appropriate training and equipment. Luckily, Jobe was involved with instructor training and was able to give coaches the basic knowledge to expand their clubs into three-position opportunities. Along with proper leadership, Jobe also found a way to provide suitable equipment for athlete use.

Through the help of the CMP, Jobe was able to obtain and place 50 used Daisy Avanti 853 air rifles in several new clubs in 2017. The single-stroke air rifles are now the staple for many new three-position clubs in Arkansas. As the teams grew and progressed, they purchased their own equipment and handed down the used rifles to other new start up teams.

“Being able to provide these air rifles for a club to use for one or two years allowed that club to raise funds or apply for grants that enabled them to upgrade their equipment to rifles such as the ever-popular Crosman Challenger or the new Daisy 599,” Jobe explained.

Learning from the successes of the BB program, in 2013, Arkansas began hosting CMP Sanctioned State Championship 3PAR matches. The matches became very popular and were widely attended by many different groups representing 4-H, JROTC and other groups. Starting in 2017, funding was provided to the top sporter team and individual to advance on to the CMP Regional Match.

Of course, starting new programs presents a need for funding them. Jobe says he handles fundraising on two levels. Locally, each team is encouraged to set up fundraising activities in their area to assist with equipment, training, travel and other items.

Some of these fundraising activities include raffle tickets, auctions and hosting shooting events to raise money. Jobe also assists local leaders with grant applications, which serves as a major source of funding for many clubs.

On a state level, Jobe generates funds and donations in a variety of manners – partnering with and developing relationships with several companies that are involved in shooting and hunting activities, including the Friends of the NRA Foundation Grants, which have provided many BB guns, air rifles and equipment to many teams in Arkansas.

The Arkansas Rifle and Pistol Association and the Arkansas Gun and Cartridge Collectors Club (affiliates of the CMP) have also been major partners in expanding youth shooting programs in Arkansas, providing additional BB guns and air rifles for new upstart clubs.

Besides recruiting outside help, Jobe also lays credit to the growth and success of Arkansas’s youth programs to those within – the passionate leaders, coaches, competitors and families who make it all possible.

“Whether I am involved with BB gun, air rifle, light rifle or YHEC, there is a strong contingency of volunteers and supporters I can count on to help,” he said. “Many of these volunteers have no youth in the programs, yet they are there when support is needed. If I have a special need or new program, these supporters are there to make it work and succeed.”

“So what am I especially proud of?” he went on. “It is the collective support of these volunteers and leaders – their commitment, their dedication, their support of youth shooting programs in Arkansas.”

From Jobe’s experience, getting youth and keeping youth interested in shooting sports is a matter of offering a wide variety of programs and helping youth figure out what they like to do best, and then building a program around it. As he says, not every youth wants to participate in  YHEC or shoot 3PAR – some youth only like shotgun, while some only want pistol. They may even start out in one program and decide later on that they enjoy another discipline instead.

According to Jobe, one of the most important things is for a program to have a large variety of opportunities, starting at a local grassroot level, then expanding to state, regional or national involvement – allowing a natural progression in competition. It allows juniors to find a venue they enjoy best and, in turn, will encourage them to promote shooting sports to other youth.

“The best way of getting juniors interested in joining a shooting program is word of mouth,” he said. “If a program is challenging, fun and rewarding to its participants, then the participants are going to tell their friends or other youth.”

FOR NEW CLUBS IN ARKANSAS:

In order to help ensure the cultivation of marksmanship at the ground level, the Civilian Marksmanship Program (CMP) appoints State Directors to oversee programs in each of the 50 states. The mission of the State Directors is to provide leadership, resource and program information, coordination, networking, motivation and publicity for junior shooting within their state. Found out who your CMP State Director is by visiting https://thecmp.org/training-tech/state-director/. Feel free to contact your State Director at any time with questions, comments or concerns.