You are here: Home / Features / Are You Bored Enough to Welcome Pain? 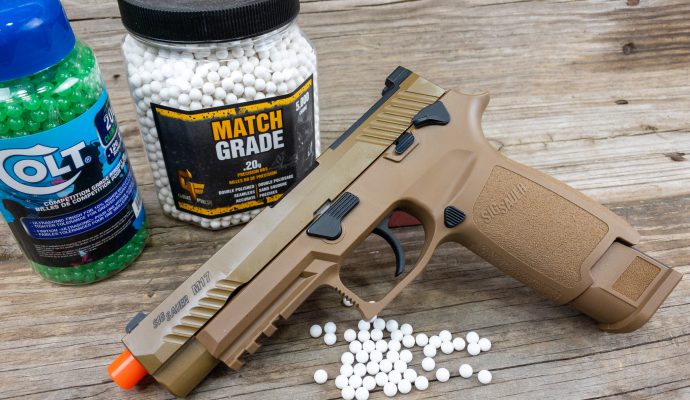 Going by my body clock, we’ve been cooped up due to this quarantine thing for at least 19 years, 11 months, and 26 days. Or so it feels. How many times have you watched Brady Bunch re-runs? All finished binge-watching the combined libraries of Netflix, Amazon, and Apple TV? Do you now know how to cook Sea Urchin Guacamole Tacos? Is the dog begging you to go back to work?

In other words, how desperate are you?

Hypothetically speaking, I might be desperate enough to have asked my son-in-law to shoot me in the butt with an airsoft pistol. Just to see how it feels. Hypothetically…

But seriously, this is a great time to check out the world of airsoft. Sure, you can shoot BB and pellet guns in the garage or backyard. But, at least when your significant other is out of the house, you can shoot airsoft guns… inside. Hint: Be sure to clean up all those plastic BBs before they get home.

Here’s the thing about airsoft guns. They shoot plastic BBs in the .20-gram weight range, give or take some. If you convert that to the airgunning terminology of grain weight, you get about 3.08. That’s a fraction of the weight of an average .177-caliber pellet or BB.

If you want to think in terms of energy, you’ll get (or experience very personally if you’re the shootee) about 0.8 foot-pounds. Not much, right?

During my quarantine boredom, I’ve been revisiting a Sig Sauer airsoft pistol — the ProForce M17. Sure, it’s fun to play with, but the real purpose of this particular model is realistic training. You see, with proper precautions, airsoft guns are great for shooting at each other. On purpose! That sounds kind of weird, right? Well, it’s true. And it explains why I felt compelled to get shot in the, well, you know.

The ProForce M17 comes in two varieties. You can order one that’s powered by the same CO2 cylinders you get at your local Mega-Mart or sporting goods store. Except Dicks. We don’t like them anymore. You can also find airsoft guns powered by something called Green Gas. It’s essentially propane mixed with lubricant. It comes packaged in airsoft-user-friendly containers you can toss in your backpack for a day of World War III with your friends.

The net-net difference between the two power systems is… power. As an example, the CO2 model of the ProForce M17 launches a .20-gram 6mm BB at up to 410 fps. The Green Gas version of the same gun flings plastic at about 320 fps since it operates at lower pressure.

The cool thing about the M17 and other airsoft guns like it is they operate pretty darn realistically. The slide reciprocates when you fire, the gun matches precisely the dimensions of the centerfire version and feels like the real deal. Even the magazines drop so you can reload like a tactical ninja. The magazine contains not only a supply of airsoft BBs but the gas source itself, in my case, the CO2 canister. The way it’s designed, the gas remains captive when you drop and reinsert magazines, so when your BB supply runs low, just reload without fear of losing your gas. Use standard holsters and magazine carriers while you’re at it.

Even though we’re shooting plastic, safety rules still apply. Those little suckers WILL put an eye out, just like your mom said, so always wear eye protection, especially when shooting at each other. If you’re going to go force-on-force, it’s a good idea to protect your whole face. Look at the bright side; you’ll look scary and tough!

So, how does it feel to get spanked with one of these? It depends. That evil and devious son-in-law launched the first shot while I was still walking away to my designated pain reception position. It hit my fairly loose fishing shirt, so like a whacking a sheet hanging on a clothesline, there was no real damage. I heard it but didn’t experience the joy of pain. The second shot was a different story. That one struck my jeans in a place where the fabric was skin tight. Dang, that thing stung! Fortunately, the welt that kept me company for several days was in a location not visible to the general public.

So, what’s the learning? These are fun. And they can hurt. And they’re great for training. While safe enough to use for force-on-force training with proper safety precautions, they deliver enough of a message to add a little stress to the activity.

If you’re going stir crazy enough to ask someone to shoot you, be sure to use an airsoft.