You are here: Home / Competition / Anna Korakaki From Greece Wins Gold In The 10M Air Pistol Event In Munich 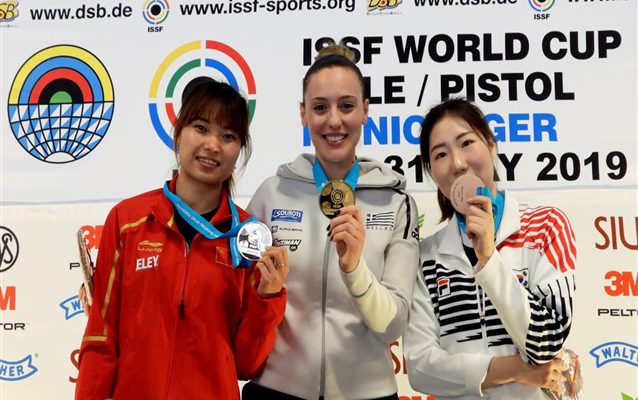 The Rio 2016 Olympic Champion Anna Korakaki from Greece won Gold in the 10m Air Pistol Women’s Final at the ISSF World Cup in Munich. In a closely contested final Anna snatched the victory from China’s Wei Qian with the last shot. Wei won both a silver medal and the quota for the Olympic Games in Tokyo.

Manu Bhaker from India finished in in fourth place and took the second Olympic quota for her country.

Olena Kostevych from Ukraine, who equalled the Qualification World Record, was fifth after the final. Julieta Mautone Jimenez from Uruguay, who set a Junior World Record in qualification, finished seventh.