You are here: Home / Features / An Ace in the Hole with This Umarex CO2 Revolver 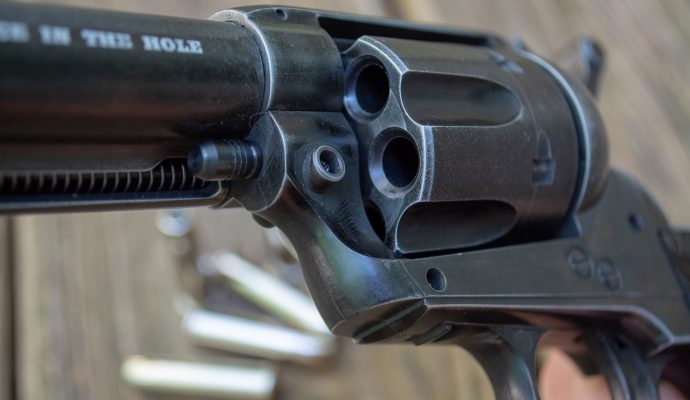 Everything has its purpose in life, even airguns. Sometimes that purpose is competition. Sometimes it’s hunting. And sometimes, or maybe much of the time, that purpose is just plain fun. Such is the case with a new air revolver that’s been getting a thorough workout in my backyard. The Umarex Legends “Ace in the Hole” CO2 Revolver is a six-shooter reminiscent of the classic Colt Army Shopkeeper. The original Shopkeeper looked like a standard Army model, but with about 1 ½ inches of barrel lopped off.

Like the original, the Umarex Legends Ace in the Hole sports a 3 1/2-inch barrel with a spring-loaded ejector rod to extract spent cartridges. “What,” you say? It’s a pellet gun! What cartridges? That’s where the “fun” purpose comes in. The Ace in the Hole fires .177 caliber pellets in a most interesting way and with a polite nod to authenticity. This nifty revolver comes with six shiny cartridges that look a heck of a lot like .357 Magnum cases. However, instead of a primer on the bottom and a bullet on top, there is a .177-caliber hole drilled right through, top to bottom. You place the pellet into the base of the cartridge and then proceed to load the cartridges in your six-gun for shooting. The air pressure blasts the pellet through the faux cartridge and into the barrel. When finished with all six, drop those cartridges out and reload them with new pellets. I guess that makes these “green” cartridges?

The ”cool” factor starts as soon as you open the (heavy) box. And there you have it. The Ace in the Hole feels like a real six-shooter. Made of actual metal, it’s got the right weight and feels legit. The finish is worn, weathered, and rustic – on purpose – and it looks great. The grips are smooth plastic with an Ace of Spades logo on each. The hammer has a large knob for “speed cocking” not that you’ll be fanning the hammer on this revolver like those gunfighters in bad spaghetti westerns. The only thing that’s not quite authentic is the plastic front sight. Presumably, due to a production economy of scale to keep the price down (that’s a total guess on my part), it’s a plastic front post that snaps onto the barrel with three half-circle “clamps,” for lack of a better word. There are spares in the box in case you lose or break one.

Operating the Ace in the Hole is a historical reenactment as well. When you place the hammer in the half-cocked position, you can rotate the cylinder to expose each chamber in front of the loading gate on the right side. The cartridges are slick, so they drop free when you tilt the revolver with the gate open. While the ejector under the barrel can be useful, it rarely seems to be necessary with this particular sample. When finished loading, close the gate and you’re ready to go. As a single-action, you’ll need to fully cock the hammer for each shot – exactly as Sam Colt designed it to work. Oh, the inside of those cartridges are lined with some type of mushy synthetic material, so there is a good seal with the pellets, and none of the pellets I tried would fall out on their own.

This is a CO2-powered air revolver, and the cylinder resides in the grip area. Just pop off the left grip panel, and you’ll see it. A recessed Allen screw on the bottom of the grip applies pressure to pierce the seal on the CO2 cylinder and lock it in place. That brings up another clever design element. On the inside of the left grip panel is an embedded Allen wrench, so you use the grip panel itself to remove and install CO2 cartridges. Better yet, there are no tools or parts.

I was curious what type of velocity I would get with this setup considering the pellet-in-cartridge starting point and subsequent transition from that into the barrel. Like a real revolver, there’s got to be some gas loss when the pellet jumps that gap between the cylinder and barrel. Unlike a real revolver, you don’t have to worry about burning the skin off your fingers if they get too close to the front of the cylinder. I set up my Shooting Chrony Beta Master Chronograph about five feet in front of the muzzle and fired a series of shots using four different types of pellets.

I also did some semi-formal accuracy testing. My high-tech 10-meter range begins on the dining room table. Propping my screen door open, the range continues out onto my back deck where I set a very sophisticated bullet trap on top of a lawn chair. If you want to buy one of these traps, I’m happy to sell them for just $399. They’re meticulously constructed from a used cardboard box filled with carefully selected old books and sealed with packing tape. Yes, we’re high-tech with this stuff.

Since my 8.5×11-inch target had five bullseyes, I added the Sig Sauer Match Pb pellets to the previous mix tested for velocity. Because the Ace in the Hole is a six-shot revolver, I fired six shot groups. That seemed logical.

The results? The Ace in the Hole definitely shoots “minute of tin can.” The trigger breaks with only about a pound and a quarter of pressure – it’s surprisingly nice for a pellet gun at this price point.

This little revolver is just pure fun. You can buy extra cartridges so you can load up a slew of ready-to-go ammo. Heck, put them in leather belt loops or bandoliers like old west gunfighters if you like. The Legends Ace in the Hole retails for $159.99.