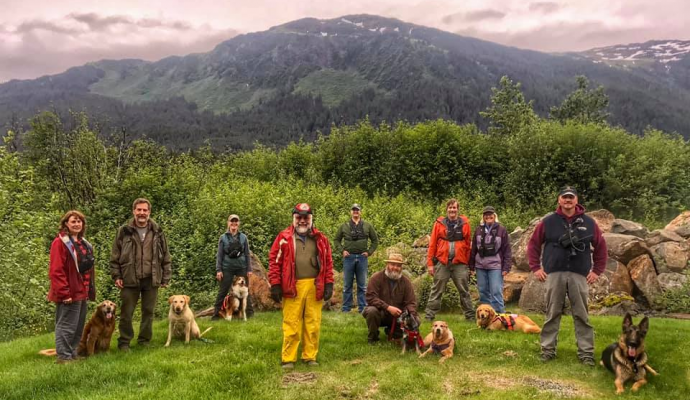 As the Civilian Marksmanship Program’s (CMP) State Director of Alaska, Bruce Bowler isn’t afraid of a challenge. A resident of Juneau, a place folded between the base of a 3,500-tall mountain and the Gastineau Channel in the Alaskan panhandle, overcoming barriers is a daily encounter for him.

“Even getting around has its challenges in Alaska!”, Bowler said.

A flight from Juneau to Anchorage, Alaska’s largest city, takes an hour-and-a-half (as well as several hundreds of dollars). It’s another 50-minute flight to continue on to the state’s third-largest city, Fairbanks.

“You could drive there, but only if you have two to three days one-way, a spare tire and possibly a replacement windshield,” Bowler said with his usual amusing commentary.

An ex-FBI agent, Bowler has devoted his life to others – moving on to work alongside the Alaska State Troopers, who handed him their inaugural “Lifetime Achievement Award” in 2004. The honor recognized Bowler for his 40 years of leadership and training with the Search and Rescue community as well as his work with the SEADOGS (South East Alaska Dogs Organized for Ground Search) K-9 Search and Rescue team that has served across Alaska and around the world.

“We have been there when people need us,” he said of the K-9 Rescue Team. “These are the people who need an award. They train 12 months a year and are the first responders when someone goes missing – day or night, 20-below zero, rain or snow.”

He modestly added, “I’m just the one in front in the color-coordinated raingear. Judy, my wife of 40 years, thought it was normal to get 2 a.m. phone calls from the Troopers, or to drop everything during rain, snow or good TV shows to try and rescue someone. She’s the one who needs the award!”

Carrying on his heroism into the world of marksmanship, Bowler has a deep history spanning more than 30 years of working with varying age levels (from 10 to 24 and beyond) through an assortment of rifle and pistol programs. He has taught hunter education courses throughout four states and has also been a certified National Rifle Association (NRA) training counselor since 1985 – the same year he became involved with Alaska’s 4-H shooting sports state team. Bowler has even served as the head rifle coach at the University of Alaska Southeast, among several other notable titles.

His work has become so remarkable that the Alaska Department of Fish and Game named Bowler the “State of Alaska Instructor of the Year” in 2019 for his involvement with marksmanship programs.

“I help coach the high school rifle team and the middle school kids (in Juneau), help with matches and do what I can for teams in the rest of the state,” he said. “We try to keep it fun and individually rewarding!”

Bowler has set up a scholastic Hunter Education course that is offered to every 6th Grader in Juneau. The course is managed through a cooperative program between the Department of Fish and Game, CMP, NRA instructors, an Alaska State Senator and a lot of like-minded individuals who believe kids should get a solid foundation in safety and ethics.

“Before they get older and think they know it all,” Bowler teased.

In recent times, the COVID-19 pandemic has slowed his efforts and has led Bowler and his colleagues traversing into unfamiliar terrain, with updated safety precautions, halted programs and other uncertainties. Despite the unknown, just as with his rescue missions up the mountainside, he hasn’t given up and has navigated forward to alternative methods in keeping marksmanship opportunities alive.

“This is probably the worst time to ask about what’s going on. The answer is NOT MUCH!” Bowler kidded about the existing programs in Alaska.

The effects of the pandemic has interrupted funding and hiring abilities at the indoor range used by Bowler, which is owned and operated by the State of Alaska’s Department of Fish and Game. In response, the state gathered a group of range safety officers (trained by Bowler) and asked them to voluntarily run the range, just to keep it open for the public.

“So far, it’s running pretty well!” Bowler said. “It’s a seven-point indoor range, and we get up to 15 people showing up at a time.”

Having to cover the entire state of Alaska, the largest land area owned by the United States (over twice the size of Texas), it’s necessary for Bowler to recruit the help of others. He is constantly in contact with area coaches and instructors, assisting them with obstacles and doing all he can to fulfill their needs.

The Anchorage School District has had to adapt in recent months, following new guidelines for their fall rifle season such as indoor practice with 10 feet of separation between individuals and being unable to share gear. GySgt Tom Foust, JROTC Specialist for the district, also utilized CMP’s resources, such as posting an article by CMP Summer Camp director, Chance Cover, on training from home for his cadets to find on social media. The team is also staying in shape in preparation for the season – ensuring they are all ready to go when pellets can again be sent downrange.

Jim Pasek, a biathlon trainer in Fairbanks, helped conduct a youth/parent day in July, where youth taught their parents how to shoot. Games of accuracy, pitting youth against parents, brought excitement and laughter to the event and even left some of the parents interested in adult classes. This fall, a Master’s Class is forming in the Fairbanks area – continuing on a tradition of marksmanship education.

Currently, Bowler himself is teaching an NRA Rifle Instructor class on Saturdays and Sundays in order to do his part in, as he says, “keeping new blood in the sport.” He’s also bringing in “new blood” to Alaska by throwing his resources to former students who are paying his influences forward to the next generation.

“A phone call came in … from a student of mine back to the Dark Ages,” Bowler joked. “He moved to Barrow, Alaska – the farthest north city in the Northern Hemisphere! He looked around and couldn’t find any shooting sports programs, so he called to ask if CMP could help him get one started.”

He went on, “Imagine – 1,000 miles away and three separate airplane trips to get there, and he calls ME!”

Lending his services any way he can, Bowler is now in talks with CMP staff to send a package of CMP Daisy Air Rifles to help jumpstart the program in Barrow.

As for fundraising programs, Bowler and several associates try to get creative – setting up an educational air rifle range at a Community Preparedness Day, where they sold five pellets for a dollar to guests. Overall, the event brought in over $200. Bowler also relies on the continuous generosity of the MidwayUSA Foundation Endowment, as do many other grateful youth marksmanship organizations around the country, along with the CMP.

For now, Bowler and his invaluable team of supporters will stay persistent in reestablishing school programs during the pandemic. Though twisting into uncharted territory with each step, doing what is necessary to stand by his fellow Alaskans into a new normal routine is a task the brave Alaskan is ready to face.

“Every day is a challenge, and we love it,” he said.

To learn more about Bruce Bowler, including his contact information, visit the CMP State Director page at https://thecmp.org/cmp-state-director/AK/.

In order ensure the cultivation of the next generation of marksmanship at the ground level, the CMP appoints State Directors to oversee programs in each of the 50 states. The mission of the State Directors is to provide leadership, resource and program information, coordination, networking, motivation and publicity for junior shooting within his or her state. Found out who your CMP State Director is by visiting https://thecmp.org/training-tech/state-director/. Feel free to contact your State Director at any time with questions, comments or concerns.