You are here: Home / Features / Airguns Don’t Get No Respect 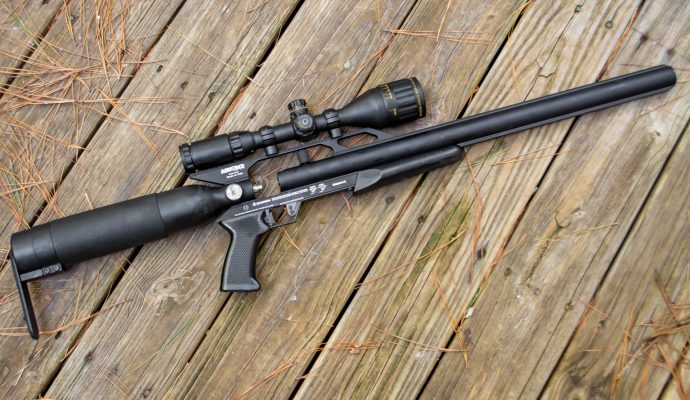 This extended sequestration is either expanding my philosophical horizons or marking a slow descent into delirium — I’m not sure which. Having run out of new ways to categorize my airgun pellets (what the heck does Meisterkugeln mean anyway?) I got into a debate with the dog over the relative merits of using hydroxychloroquine as a treatment for COVID-19 prior to clinical trials. She fell asleep mid discussion so I’m not exactly sure what she believes.

Needing better conversational stimulation, I went down to my man cave and interviewed the collection of airguns present about their aspirations, challenges, and state of mind. To a man, they gave the same response.

I don’t get no respect.

It’s a hard concept to understand as the world is filled with airgun aficionados. No, make that fanatics, but I use the term in a complimentary way. Heck, airguns are even used in the Olympics. How do you get more respectable than that?

I think the problem comes from the centerfire world. To many of those folks, airguns remain toys and aren’t “real” guns. I have to confess before I got the airgun bug, I could relate to that sentiment. I had nothing against them, but I didn’t give them the same degree of, well, respect as I did the noisier and smellier projectile launchers in my safe.

If you take an analytical approach to understand the upturned noses, the bigotry is hard to comprehend. Both centerfire and airguns can launch bullets (or pellets if you like) downrange with authority. While centerfires will always win the top-end velocity and kinetic energy bragging rights, the modern big bore airgun has caught up to the muzzleloader world.

I spent some pre-quarantine quality time with a Gamo TC45 air rifle and test-fired a wide variety of projectiles. Dare I call them pellets when weight ranged from 138 grains (that’s more than the average 9mm pistol round) to a whopping 411 grains? I knew those had arrived when I saw my mail truck’s rear bumper dragging down my street.

Weight is one thing, but meaningless without sufficient velocity to develop kinetic energy and momentum. That 138-grain pellet left the TC45 at an average of 882.0 feet per second. If you do the math, that translates into 238.4 foot-pounds — roughly equivalent to a .38 Special in the centerfire world. On the heavy end of the spectrum, that 411-grain slug moved at 636.7 fps — enough to generate 370 foot-pounds of kinetic energy.

We’re certainly not in Toyland now, are we? With heavy lead slugs and respectable velocity we’re in serious tree-perforating territory.

It’s easy to cherry-pick the big bores and claim real power for airguns, but the smaller calibers aren’t slouches either. While a .22 airgun doesn’t translate to a .22 rimfire in terms of energy, a .25 caliber sure comes close. The AirForce Condor SS air rifle shown here features a direct feed chamber, so it just doesn’t care what type of pellet or slug you load. One that works particularly well is the Hunters Supply 48-grain hollow-point slug. I measure an average velocity of 889 fps. That generates about 85 foot-pounds of energy — a figure within spitting distance of the .22LR.

So what gives? Is it the lack of smoke and fire? Not having to use caustic chemicals to clean airguns after every range session? I don’t know. Perhaps making the kitchen smell like Hoppe’s #9 casserole is a symbol of manhood. All I know is that airguns earn plenty of respect around this household, especially while I’m getting them delivered directly to my front porch, silencers and all.