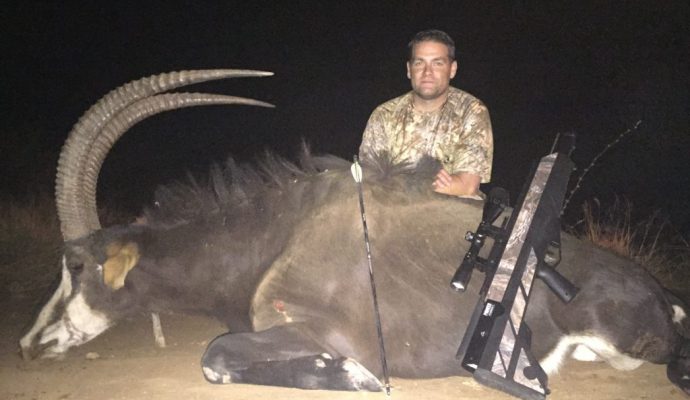 Record sable is first within the air archery category

01.04.21, Springfield, MO. Airgun Hunting Legion is proud to announce the newest world record air archery sable taken by Airgun Hunting Legion member Gary S. of Utah. Gary’s record sable was taken with the Benjamin Airbow in August of 2017 and scores 97 & 2/8ths inches SCI. This is the first recorded Sable taken within the air archery category and is the standing world record.

“We are thrilled for our member Gary S. as the newest airgun world record holder for Sable in the air archery category,” says Director, Jason Reid. “Gary is having a great week with the recognition of his record black bear and now Sable. Gary’s Sable is a great example of the ethical power of air archery equipment for taking down big game.”

”In August of 2017 I was sitting over a water hole in South Africa with Motshwere Safaris actually looking for a cape buffalo when his beautiful sable walked into range, said Gary. “After waiting almost an hour I decided to take the shot. I hit him in the left shoulder and had a complete pass through.  He walked about twenty steps and expired. The 125 grain dangerous game fixed two blade broadhead did some serious damage.”

Airgun Hunting Legion is the first and only recognized airgun hunting record book. Airgun hunters can now submit their successful in-field achievements for score and rank in big and small game categories. Airgun Hunting Legion helps hunters find the resources they need through the interactive community website to plan their next hunt successfully and provides exclusive member discounts on hunts and gear Visit www.airgunhuntinglegion.com to become a member and follow AHL on Facebook and Instagram. For more information, email info@airgunhl.com.