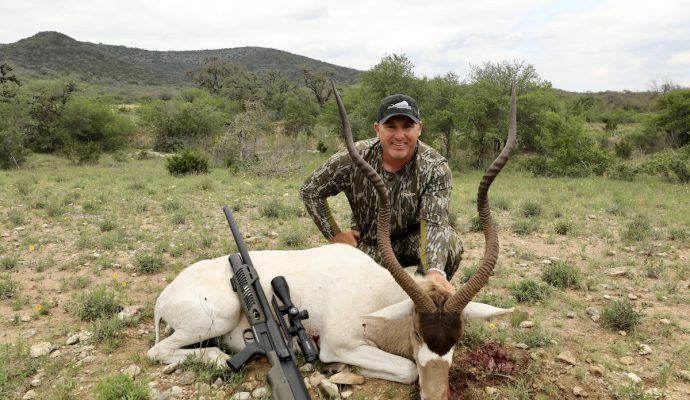 “John is an avid hunter and gun collector. When he came out to our Legion Experience he not only wanted to learn big bore airguns but also challenged himself to stalk and Addax successfully,” says Legion Director, Jeff Giffin. “John’s Addax breaks down so many barriers for the air rifle hunting community proving the ethical power of big-bore air rifles once again.”

“I am a gun enthusiast, I have hundreds of guns and the Hammer was nothing like I shot before,” says John. There were a few different animals on John’s list and he was excited about getting an Addax. “After doing some shooting and getting familiar with my new weapon I couldn’t wait to get in the field and test it out on a stalk hunt. Not long into my hunt, I was presented with an opportunity to harvest a huge Addax. As the animal came into range, I readied myself for a shot and was able to drop him in his tracks! Once I made my way up to the addax and realized how big it was, I couldn’t believe how well this airgun performed. My guide informed me that he thought it would be a new world record and I was beyond excited. I have been on hundreds of amazing hunts and harvested tons of really great trophy animals in my hunting career but this is the first that was going to land on the top of the record book.”

Airgun Hunting Legion is the first recognized airgun hunting record book. Airgun hunters can now submit their successful in-field achievements for score and rank in big and small game categories. Airgun Hunting Legion helps hunters find the resources they need through the interactive community website to plan their next hunt successfully and provides exclusive member events as well as discounts on hunts and gear. Visit www.airgunhuntinglegion.com to become a member and follow AHL on Facebook and Instagram. For more information, email info@airgunhl.com.