You are here: Home / Airguns / AirForce Texans Power Up with Carbon Fiber 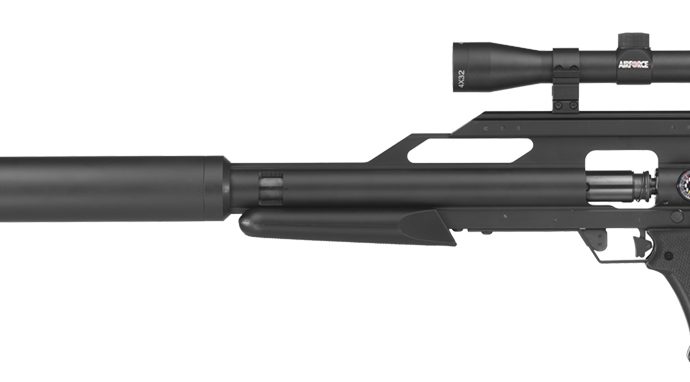 (Fort Worth, TX – October 9, 2019) America’s First Family of Big Bore Air Rifles just got more power. Thanks to a new carbon fiber tank and valve system, all 4 members of the Texan family just got a power boost. The Texan is now capable of energy levels of 750 foot pounds with a 520 grain projectile. This is a new level of power from any air rifle and keeps the Texan family as the world’s most powerful  production air rifles.

The new carbon fiber tank, while slightly smaller in physical size, actually holds 3625 psi or 250 BAR of air, which gives the Texan more power. That power increase opens up hunting of larger game by delivering a heavy projectile to the target with up to 750 foot pounds of energy, which is more than enough to take a whitetail down with a single shot. The new tank is also lighter than the aluminum tanks by about half a pound.

AirForce Founder and CEO John McCaslin commented that, “AirForce made the tank smaller, lighter and capable of delivering more power than ever. We are constantly looking to improve our air rifles and make them more powerful. It is what we do.” McCaslin went on to note that, “The power increases are just getting started as we examine new technologies in both air tanks and valve systems. It is what we do here at AirForce.”

Since its release in 2015 the Texan has continued to be the most powerful production air rifle on the market. The Texan, preferred by hunters the world over, has successfully taken game in the hands of pro-staffers and the general public alike. With the 2019 season substantially increasing the number of states allowing air rifles as a legal method of take for big game, the Texan has seen more success in the hands of hunters than ever before. The Texcan family has grown from the Original Texan to now include the sound supressed TexanSS, the short barrel Texan Carbine and the TexanLSS which is a sound suppressed Texan with a full length barrel.

“With the sport of airgun hunting growing at an exponential rate, the amount of feedback Airforce receives from hunters and airgunners is essential to our R and D process” said AirForce Airguns Director of Marketing, Cameron Brinkerhoff. “The amazing amount of input that comes to us from the field has served to focus our work on more power in the same package. The new carbon fiber tank system answers that feedback.”

Established in 1998, AirForce Airguns was the first company to mass produce high quality PCP air rifles in the United States. Every AirForce rifle features a German made Lothar Walther match grade barrel with all other components being manufactured and assembled in their Ft. Worth, Texas based manufacturing facility. AirForce Airguns, a founding member of the Airgun Sporting Association, continues to work to educate legislators and regulators about airguns on a local, state, and national level.