You are here: Home / Competition / A Token of Excellence: A Look at the Junior Distinguished Badge Program 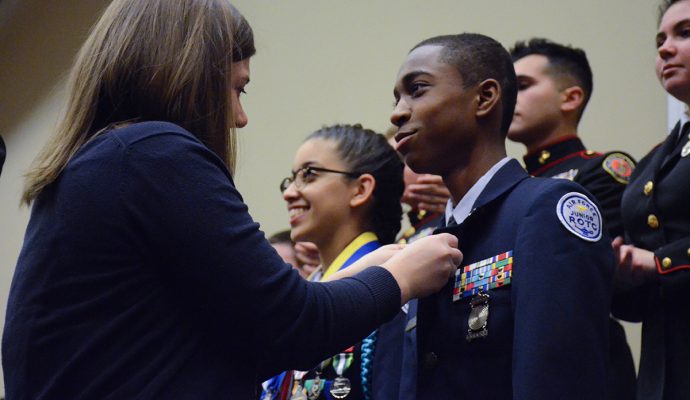 Junior air rifle competitions are where exceptional talent is always on full display. Young athletes train for countless hours, days, weeks, months to earn the chance to demonstrate their grit on the firing line, hoping for any tangible evidence of their hard work – a token of their efforts to show.

For many, that token is the Junior Distinguished Badge.

In 1996, a new federal law transferred responsibility of the Distinguished Badge program from the Department of Defense to the Civilian Marksmanship Program (CMP). With its new authority over awarding badges, the CMP, in cooperation with the National Three-Position Air Rifle Council, created a new Junior Distinguished Badge in 2001 for Three-Position Air Rifle competition.

Now, nearly 20 years later, over 1,480 badges have been presented to talented junior athletes.

To receive a Junior Distinguished Badge, consistency in performance is key. A junior must place among the top competitors in state, regional and national junior Excellence-In-Competition (EIC) credit events. These events can be searched for on the CMP Competition Tracker page (https://ct.thecmp.org, “Competitions,” “Search for a Competition”).

Once a junior has earned 30 or more EIC points, he or she has earned the honor of being called “Distinguished.” The gold-filled badges are provided by the CMP at no cost and ceremoniously awarded at events, whenever possible.

Many skilled athletes who have received the Junior Distinguished Badge over the years have carried their marksmanship careers on to other prestigious honors within the sport.

Brandon Green, now SFC Brandon Green, was the recipient of Badge #1 as a junior competitor back in 2001. Green went on to become a decorated member of the Army Marksmanship Unit Service Rifle team, where he is still competing. Among several earned titles and accomplishments, in 2018, Green fired a perfect score in his overall win in the President’s Rifle Match held during the National Matches at Camp Perry – a feat that had never been accomplished before.

Receiving Badge #2 the same year as Green was James Hall, who went on to compete with the Jacksonville State rifle team – winning three consecutive smallbore titles from 2005-2007. In recent years, Hall switched from air rifle to air pistol and has gone on to successfully compete both around the United States and abroad, even earning himself a spot on the 2020 Olympic team (now moved to 2021). He is one of many Olympic team members, past and present, who hold Junior Distinguished Badges.

A number of other notable marksmen have made their marks on the world in and outside of competition, including CMP staff members Catherine Green and Katie Harrington who received their Distinguished Air Rifle Badges as juniors. Green, who was a member of the Texas Christian University rifle team, earned her junior badge in 2010, while Harrington, a former rifle athlete for the University of Nebraska, earned her badge in 2004.

As a program coordinator, Harrington is a familiar face for anyone who has been to a CMP junior air rifle match. During competition, she’s diligent behind the computer, answering questions, ensuring all of the electronic target software is running smoothly, maintaining the accuracy of scores online and keeping the match as efficient as possible. Once competition is over, she’s customarily given the honor of presenting and pinning Junior Distinguished Badges onto new recipients.

“One of my favorite things is getting to award the badge to a competitor during the awards ceremony when they weren’t aware they had earned it that day,” she said. “They’re always so surprised and happy to be receiving it.”

She went on to speak of the notability of the badge itself – the significance of its history with its relation to the service rifle badge and its unwavering importance to current air rifle athletes.

“It gives everyone something to work towards, and it’s not an easy thing to earn,” she said. “We work to keep the requirements attainable but also difficult, so the badge represents a lot of hard work.”

To learn more about the Junior Distinguished Badge program, visit the CMP website at https://thecmp.org/youth/junior-distinguished-badge/.