You are here: Home / Airguns / A Look at the Umarex Synergis Underlever Air Rifle 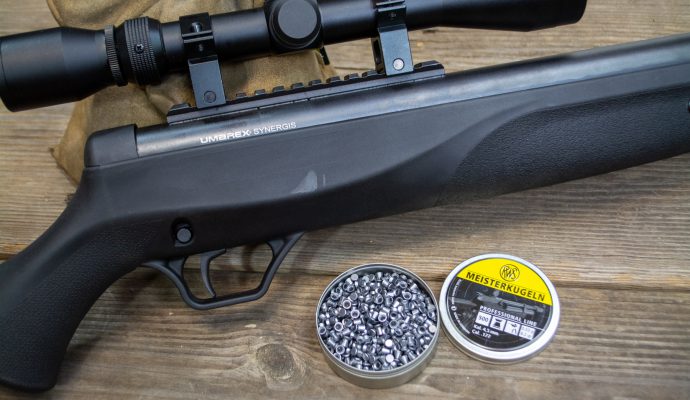 The Umarex Synergis is a beast of a rifle but I mean than in a loving and affectionate way. It’s got weight to it and the feel is pleasant. I much prefer a rifle with some steel for handling and stability when shooting and the Synergis has it. The underlever design is inherently muzzle heavy, and for me, this keeps the rifle surprisingly still when shooting freehand.

As you’ve already guessed, this is an underlever. It’s also a repeater with a 12-shot magazine mounted just forward of the receiver. The underlever part is key. By definition, the barrel is fixed to the receiver so there’s no risk of “barrel droop” or shot-to-shot accuracy shift resulting from inconsistent barrel lockup.

The underlever cocking mechanism is easy to use thanks to its length. A generous hand hold under the muzzle locks into place. To start the cocking motion, just slide it a fraction of an inch towards the receiver at which point it releases. From then on, the full cycle requires only moderate muscle power. Near the end of the cocking stroke, the rotary magazine will advance, lining up the next pellet. As you close the lever and snap it back into place, a fresh pellet is pushed into the chamber. All of this motion compresses a gas piston which provides the stored power that’s released when you press the trigger.

Speaking of… The trigger is fantastic on the Umarex Synergis. There’s no detectable take-up followed by a crisp break. I measured it between 2 ¼ and 2 ½ pounds. The face is smooth, so the combination of weight, lack of grit, and crisp feel make this rifle easy to shoot accurately.

The rifle stock is made of polymer but there’s plenty of metal elsewhere, giving the Synergis it’s solid feel. The receiver is topped by a Picatinny rail and Umarex includes a 3-9×32 scope and rings. This rifle is ready for the range right out of the box. After three zeroing shots and a few scope adjustments, I was on target and shooting.

To get an idea of what it could do, I headed to my indoor 15-yard range. The large space under my house is private, free of wind, and available anytime my wife isn’t home. Down there I did some checks of both velocity and accuracy.

Using the nifty new FX Pocket Chronograph radar chronograph, which isn’t at all dependent on perfect light conditions, I fired 10-shot strings of the RWS Superdome .177 pellets. These weigh in at 8.3 grains. The Pocket Chronograph captures the muzzle velocity of each shot, saves it, and calculates low and high velocities, extreme spread, and even standard deviation. These pellets averaged 921 feet per second. The low velocity was 905 and the high 930 for an extreme spread of 25 feet per second. I’ll spare you having to do the math; the standard deviation of that string works out to 9.4. As for energy, we’re talking 15.6 foot-pounds.

So, what does that tell us? With an average .177 pellet, we’re looking at a 1,000 fps rifle. Using lighter alloy pellets, that might push up towards 1,200 or so if you care about maximum velocity.

To get a feel for accuracy, I cranked the included 9x Umarex scope all the way up to maximum and fired five-shot groups with the RWS Meisterkugeln match pellets. Those weigh in at 8.2 grains, and as you’d expect, have a flat head design so they make crisp and easy-to-measure holes in paper. Group size from 15 yards measured just .46 inches. Not too shabby, eh?