You are here: Home / Airsoft / A Look at the Gamo Swarm Fusion 10X Gen 2 Air Rifle 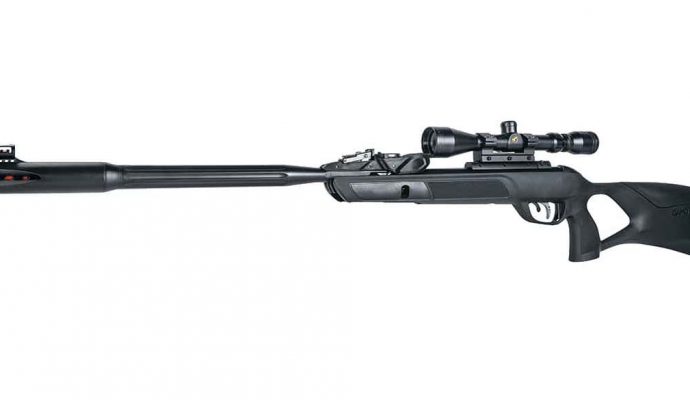 The original Gamo Swarm Maxxim rifle brought rapid fire to the company’s break-barrel air rifles. A clever loading device, attached to the break-action, fed a new pellet from a 10-shot magazine into the chamber with each cocking stroke. It was a neat system that allowed for faster follow up shots, especially useful when hunting. One drawback was the vertical orientation of the magazine. That limited sighting options to a scope only as the mechanism and magazine would block an iron sight picture.

With the new Gamo Swarm Fusion 10x Gen 2 air rifle, that problem has been banished. The Gen 2 rifle uses an even more ingenious loading mechanism that turns the magazine on its ear—literally. It now lays flat, so it’s out of the sight picture completely. What that means to you is that you have a choice of using iron sights or a scope. The rifle ships with both, but you can easily reconfigure to your preference.

You’ll notice some other differences from the original. The stock has been redesigned to a sexier thumbhole model with a vertical grip. I like it. It feels like a natural extension of your arm and facilitates off-hand shooting. Like the original, the new Swarm Fusion 10x Gen 2 uses an inert gas piston as its power source and features a generous recoil pad to dampen movement and facilitate shot follow through.

This rifle comes equipped with both iron sights and a magnified scope. The iron sights consist of a red / orange fiber-optic tube up front and adjustable notch in the back. The front sight is shielded by a cover with plenty of cutouts to allow maximum light exposure to the inner fiber optic tube. The shield is a great idea as the front sight lives in the same neighborhood where you’ll grab the barrel to cock this rifle, so it provides needed physical protection. Good plan. The rear sight is placed just forward of the magazine and barrel break, so it’ll maintain its precise position relative the front sight. It’s fully adjustable for windage and elevation and the notch is flanked by the ends of a green fiber optic tube, so you’ll see two bright green dots. If I’m to be picky, I might have left off the rear fiber optics altogether, or maybe reversed the colors, as the rear dots glow more brightly than the front, so it takes a bit of looking to center the front sight. Maybe it’s my older eyes. The included scope is a Gamo 3-9×40 adjustable variety.

So, enough about the technicalities. How does it shoot?

First off, cocking this rifle is easy. The moderator on the end presents a nice big hand-grab point, and it’s long enough that the front sight housing didn’t get in my way. It’s a smooth action with plenty of leverage, so recharging this rifle is a piece of cake. The specs say it’s a 30-pound weight, but it doesn’t feel that heavy.

As for the magazine, it’s easy to load. There are no fancy gyrations to fill up the drum. Just rotate the internal carrier until you see daylight through the hole, drop a pellet in, and continue rotating to the next position. Unlike some other magazine designs out there, this one is intuitive. Translation: I didn’t read the instructions and still managed to fling projectiles in a forward direction.

I thought this a good opportunity to use the new FX Pocket Chronograph to measure some real velocities of a few different pellets. This little wonder is not much bigger than a deck of cards. Using radar and Bluetooth to communicate with a companion cell phone app, it clocks velocities with outstanding accuracy. The best part is that there is no gear to place down range. Just set it on the shooting bench and fire over the top. The results show on your smartphone and are recorded for posterity. Dear FX Engineers: Please make one of these what works with centerfire firearms too. Thanks.

I did a bit of informal accuracy testing in my world-class indoor shooting facility. I’ve found that, if my wife isn’t home, and I set up a bench in one corner of the large garage space under my raised house, then place a target setup in the opposite corner, that I get a solid 20 yards. Since the space is enclosed, there’s no wind for me to blame for poor shots.

I should note that the included scope has a longer preset parallax focus distance, so the target was somewhat blurry at that shorter range. No matter, I quickly decided that this particular rifle will be a lot more fun shooting with the built-in iron sights anyway. After my accuracy session, I removed the scope to continue my shooting adventures using the iron sights. I’d likely keep it in this configuration unless the primary use was longer distance pest control or target shooting. There’s just something natural about the irons combined with the new thumbhole stock, but your mileage may vary.