You are here: Home / Features / A Look at the Benjamin Fortitude Air Rifle 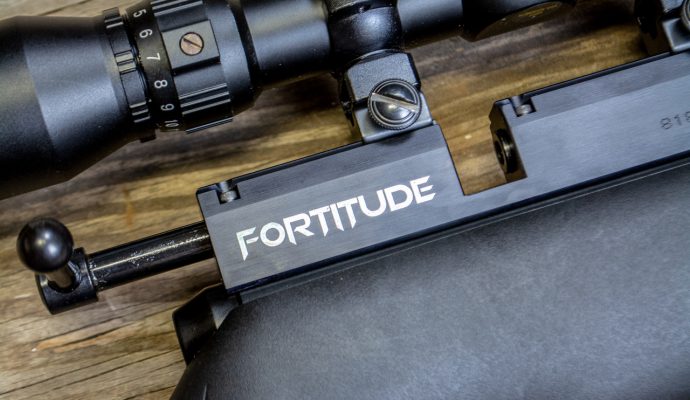 Airguns are complicated beasts. There’s a lot of engineering under the hood required not just to launch a pellet accurately and with sufficient power, but to do it over and over again with consistency. One of the significant breakthroughs of recent product offerings is regulated performance at an average Joe price point. Adding a regulator puts a “consistency step” between the air reservoir and the chamber. The goal is to provide the exact same air charge to each shot, even if the reservoir pressure is dipping. Think of it as an airlock on a spaceship. No matter what the pressure is inside or lack of it outside, the pressure in the airlock is constant.

The Benjamin Fortitude air rifle is an excellent example of expensive features migrating to rifles priced for mass consumption. The Fortitude carries an MSRP of just $299.99. The company designed this rifle with large shot capacity with level performance in mind. “Our consumers told us loud and clear that getting a high shot count without sacrificing speed and power is one of the most desired benefits for a PCP gun,” said Philip Guadalupe, Product Manager. Hold that thought; we’ll come back to it in a minute.

The Benjamin Fortitude air rifle is a bolt-action repeater with a 10-pellet rotary magazine. It’s a little unusual to load until you get the hang of it. By rotating the plastic cover all the way around clockwise, against spring pressure, you expose the magazine chamber aligned with the bore. Drop a pellet in there, and you can then rotate the cover counter-clockwise, dropping a pellet into each of the remaining nine slots.

The barrel is wholly shrouded, and that really helps with the noise level. The Fortitude is one of the quieter .22 caliber rifles that we’ve tested. As long as you’re being safe and using a good backstop, it’s backyard and garage friendly. Under the barrel is a 3,000-psi air reservoir. I like the design of this – a lot. The fill port has a Foster connection at the muzzle end. It’s covered with a protective cap that snaps on and off, so you won’t bang it around on things while in use. Besides a positive and locking fill connector type that’s friendly to hand pumps, the front of the reservoir fill connection location has an even more important benefit. The manometer (pressure gauge) is located on the bottom of the stock under the scope mount area. That means you don’t have to stick your face in front of the muzzle to see the remaining charge in the rifle. I wish more manufacturers would do this. The manometer is marked in pounds per square inch with a “white zone” between 500 and 3,000 pounds per square inch.

The stock is all polymer and very light. It’s got sling swivels up front and under the buttstock. The butt pad appears to be separate but is really part of the molded polymer stock itself. A cross-bolt safety engages and disengages manually. It doesn’t reset on every shot. Personally, I prefer this design as I would rather have full control myself over when the rifle is in safe and fire modes.

Triggers are one of those “under the covers” features and you get what you pay for. That’s just math and science because a spiffy and perfectly engineered trigger costs time and money to manufacture. I know of one trigger system that uses something like seven different materials (plastics and different types of metals) in the trigger assembly for the express purpose of balancing weight, performance, and a dozen other performance factors. It’s complicated stuff to do it right.

One of the big selling points of the Benjamin Fortitude is that it gives you a regulated and accuratePCP rifle for a couple of hundred bucks. Math says you’re not going to get a match trigger like the one you’d find on a $2,500 air rifle.

With all that said, the Fortitude trigger is OK. It’s not great, but it’s not terrible either. It’s a bit heavy as airguns go. I weighed the trigger for a number of shots and measured pull weights ranging between five and five and a half pounds. The pull weight moved around a bit with each shot, but everything fell within that range. The one on this rifle has about an eighth of an inch of smooth take-up followed by a quarter inch (give or take) of pressure, followed by a decent break.

I’m not a certified triggernometry engineer, so I won’t pass judgment as to why the trigger isn’t just a bit lighter. However, if I could polish my genie lamp and get one Fortitude wish, it would be for a few pounds of weight loss. Make no mistake, I was able to get accurate results on target from this rifle; it just takes a bit more focus and concentration on the shooter’s part. Hey, I suppose it’s good training for trigger technique!

The company advertises that the regulated Fortitude will get up to 90 consistent shots per fill. Depending on which of the two caliber offerings you choose, .177 or .22, velocity is claimed as up to 950 and 800 feet per second respectively. I shot a variety of both lead and alloy pellets with the .22-caliber Fortitude shown here to see what kind of velocities it was cranking out and the accuracy of the rifle.

Before my “shot up” chronograph finally kicked the bucket, I managed to get velocity readings on three different pellet types as follows.

While shooting to measure velocity, I also wanted to see how many consistent shots I could get out of a full charge. Being that my chronograph puked mid testing, I wasn’t able to measure any more velocity readings. For accuracy testing, I was topping off the reservoir every two or three magazines anyway, and I noticed that after 30 shots, the reservoir pressure only fell from 3,000 psi to about 2,600. Given that apparent efficiency, I wouldn’t have trouble believing that I could get 70 to 90 shots out of this rifle before things started to get wonky. When the new, not-shot-to-pieces chronograph arrives, we’ll post a quick update story with actual numbers.

I did accuracy testing at 25 yards as I was shooting outdoors on a day with quartering winds gusting to about 8mph. Here’s what I measured for five-shot groups from that distance.

Though the wind was giving me some fits, I moved targets out to 50 yards and shot a couple of groups with the heavier H&N Sport Barracuda Match pellets figuring that they might blow around a bit less. Even with the breeze, I measured five-shot groups of 1.39 and 1.7 inches. Not bad!

I was pleased with the function of this rifle. While the bolt was on the tight side and I had to focus to make sure I cycled it fully, it was completely reliable in terms of feeding and operation. I was also happy with the accuracy. For an entry-level PCP, I think it’s a great value. It’s also hand pump friendly. With its high shot count per fill, it’s not a bad scenario to keep this rifle filled with a manual pump – you won’t give yourself a stroke at every range outing. I’d probably tinker with the trigger and bolt a bit, mainly because I’m spoiled. Some users have reported success with re-torquing rear receiver screws and tinkering with the trigger, so some of those home modifications might be worth a look. If you want to get into PCP on a budget, check out the Benjamin Fortitude air rifle.