You are here: Home / Airguns / A Christmas Air Gun? 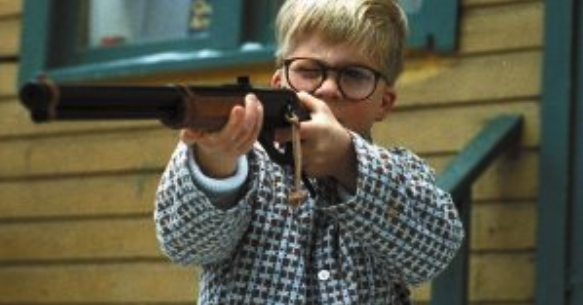 Remember “A Christmas Story” the classic movie tale of Ralphie Parker and his dreamed-of Christmas Red Ryder BB gun? If you don’t you’ll probably have a number of chances to see it again within the next week—the film has run on cable channels nearly every Christmas season since it was filmed in 1983.

Basically the film is about Ralphie, a sort of geeky kid circa 1940s who obsesses on a special model of the venerable BB gun, while his mother is sure it will be his destruction. His beset and frequently blixtoflipblankety-blanking dad (there were no curse words uttered in the film, but lots of near misses from ol’ pop) has to be convinced the gun is OK—which of course he is by the end of the film. Ralphie defeats a bully, gets the present of his dreams and all live happily ever after, sort of.

There are still a lot of Ralphie Parkers out there who might want an actual shootable gun for Christmas, even in this age of iPhones, Siri and Alexa. And the modern version of the Red Ryder is still around, and still on the Christmas wish list for a lot of kids, particularly those who have grown up in hunting and shooting families. But many older kids and a whole lot of adults might prefer some of the amazing advances in air gun technology that have come along in the last few years—and that are now sold at affordable prices for most of us.

First, a caution—even though Ralphie was a kid who needed glasses and frequent adult advice to stay out of trouble, air guns beyond the “Air-Soft” models do not fall into the category of toys for kids of any age. Even the basic Daisy Red Ryder is capable of causing serious injury to humans, pets, windows, televisions and the paint job on your BMW–anything that can be injured or broken. Like archery gear, which is increasingly popular among young people these post “Catching Fire” days, an air gun used carelessly can be dangerous.

With that provision, responsible older kids under adult supervision—and responsible adults—might well have an air-powered BB gun or pellet rifle on their Christmas list this year. The guns are far quieter than even a .22 short rimfire and their range is far more limited, making it possible to enjoy target practice safely and without bothering the neighbors in safely backstopped areas that are not miles out of town. In families where firearms are part of the legacy, they can make a good first gun for training.

It’s also a big plus that ammo costs a fraction of what standard ammunition costs—you can do many hours of shooting for what it would cost for a few minutes with center-fire or even rim-fire conventional firearms.

For those who get more serious about air gun shooting, there are now big bore air guns with amazing power that are actually being used to take deer and other big game. They’re expensive, noisy and of course dangerous when used carelessly, but it’s a mark of the strides airgun manufacturers have made in recent years to develop this sort of power.

Daisy is by far the best-known manufacturer of air guns in the U.S.—the company has been making them since 1895. The company and their Gamo subsidiary make a broad spectrum of air rifles, both bb guns that shoot round steel bb’s and pellet guns, which fire larger rifled slugs in .177 or .22 sizes. (Some larger-bore rifles in the .35 size are also available now for hunting, but are much above the entry-level pricing.)

Pellet guns are more powerful and more accurate at longer ranges than BB guns. In fact, they’re used in the Olympics—there are 10-meter (about 32.8 feet) events in both pistol and rifle divisions. To be sure, the rifles used by these super-accurate shooters are very, very pricey—some made by Anschutz list at over $4,500.

But it’s possible to get into air gun shooting very economically. The classic Daisy Red Ryder is still just 25 bucks at Wal-Mart. And much improved entry-level pellet rifles are also surprisingly affordable. One of the more interesting offerings this year is the new Gamo Swarm Maxxim, a 10-shot repeater that comes with a 3 x 9 x 40 mm scope for about $180.

The Swarm is no kid’s toy—it can shoot a .177 pellet at up to 1300 feet per second according to the manufacturer. (A .22 version is also available.) A .22 short rimfire goes downrange at around 1100 feet per second, so clearly the Swarm has to be treated as any firearm, never pointed at anything one would not want to shoot, never loaded except when shooting is imminent and always treated as if it were loaded, even when thought to be empty.

The repeating function is a big plus in the Swarm—most pellet guns require you to cock the gun, insert a pellet and fire, then cock again, insert another pellet and so on. It’s slow and bothersome when target shooting. The Swarm uses a rotating cylinder to hold 10 pellets, so it’s possible to shoot 10 times without reloading. A counter on the side of the cylinder shows how many shots are left.

The scope also adds another dimension to the rifle—it’s got the same adjustments for windage and elevation as scopes costing a whole lot more, and optic quality is good for the price level. (If you’re not familiar with sighting in a scope, there are plenty of good videos on the internet to show you how—basically right and left adjustments are on the side dial, up and down on the top dial.)

To shoot, you simply pull down on the barrel to recharge the gun with air, close it up, release the safety, aim, and fire. Once sighted in, accuracy is on a par with conventional rifles at short ranges, out to about 30 yards, and good shooters can hit a golf ball at 50 to 80 yards.

Not only is the gun good for target shooting, if you’ve got a pesky squirrel chewing holes in your eaves—which I did prior to getting the Gamo—it can be a very quick solution. (Before you write, note that squirrel season is open across Alabama Sept. 14 to March 8, with the limit 8 daily.)

To get more details on air guns, visit https://gamousa.com or https://www.daisy.com.

For those who get into air gun shooting seriously, there are national competitions, including the upcoming Camp Perry Open Jan. 13-17 near Port Clinton, Ohio—see details here: http://thecmp.org/air/cmp-competition-center-event-matches/camp-perry-open.