You are here: Home / Airguns / A BB Springfield Armory XD(M) from Air Venturi 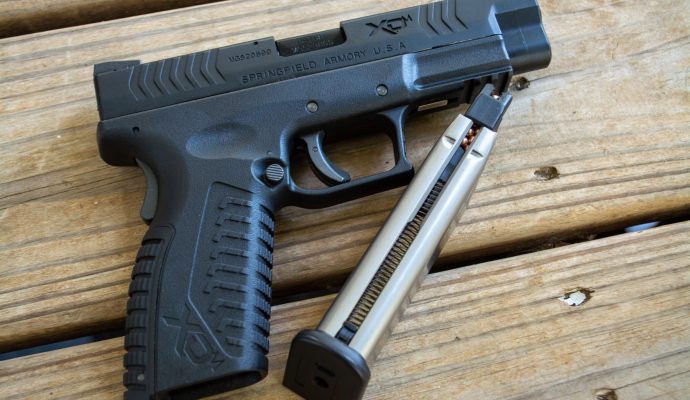 If it looks like a pistol, operates like a real pistol, but you can use it in your backyard or garage, is it still fun?

Apparently, the Air Venturi folks have rented office space in Geneseo, IL because there’s some nifty new Springfield Airguns showing up on the shelves. I’ve gotten my hands on a Springfield Armory XD(M) and an M1 Carbine, both chambered in the garage, backyard, and basement-friendly .177 BB caliber. We’ll take a closer look at the M1 Carbine at a future date, so for now, let’s focus on the XD(M) pistol.

This BB pistol looks, acts, and feels like the centerfire version. I have a full-size XD(M) OSP Threaded model here at the moment, and except for the optics plate and extended barrel, the two pistols are virtually indistinguishable. The dimensions are the same so you can use a holster if you want to train at home. The package includes two interchangeable back straps so you can adjust to your preferred grip size. Even the striker status indicator on the rear of the slide is the same—and it works. When the pin protrudes, the pistol is ready to fire.

The functions mirror the noisier version as well. There’s an ambidextrous magazine release button, slide lock lever, and takedown lever. On the rear of the grip, you’ll see the classic XD(M) grip safety. It works. When not depressed, the trigger swings freely but the pistol won’t fire. When you assume a normal firing grip and depress the safety, the trigger operates as expected.

There is a hidden manual safety on this XD(M). Just forward of the trigger guard and behind the forward rail slots, you’ll see what appears to be the serial number inset. This part is a sliding manual safety. Slide it back towards the grip to lock the trigger and forward to fire.

The XDM is a CO2-powered pistol and the removable magazine has an access port at the bottom. Just slide the baseplate off, remove the retention cap using the included Allen tool, insert a new cylinder (don’t forget a drop of Pellgun or similar oil), and reassemble. It’s easy and the Allen tool is compatible with most other similar guns so it’s not a specialized part to lose. The nifty thing about the CO2 magazine design is that you can drop the magazine mid-use without losing gas. That’s a handy feature for training and still a convenience even if you’re an exclusive air gunner.

The BB reservoir is in the front edge of the magazine. Using the included assist tool, pull the follower down and dump them in the enlarged area of the follower slot. I started with the Air Venturi Dust Devil BBs which have a BB pouring feature built right into the box. The loading operation took about three seconds. Seriously, this is a welcome feature. Too many BB and pellet guns take 10 times longer to load than shoot. By the way, this XD(M) holds 20 BBs. Whether coincidental or planned, it’s a subtle nod to the capacity of the 9mm full-size XD(M) pistol–also 20 rounds.

Upon loading, I headed to the back porch to sling some copper. I’d just received one of the new FX Airguns Pocket Chronograph and was itching to try it out with the Air Venturi XD(M). This small and light unit contains a radar sensor that measures the velocity of most anything up to about 1,300 feet per second, so it’s perfect for airguns. We’ll come back to this little gem in a week or so.

After turning on the FX Pocket Chronograph and connecting it via Bluetooth to its companion iPhone app, I fired some Dust Devils and standard copper-coated BBs to see how fast this full-size XD(M) was launching tin can death. As expected, the lighter 4.35-grain Dust Devils moved a bit faster, averaging 309 feet per second. The Crosman Copperhead copper-coated BBs are a bit heavier, at 5.23 grains, so they flew a hair slower. According to the radar, the shot string on those averaged 299 feet per second.

Shooting this BB-powered XD(M) is a blast, albeit a quiet one. There’s the expected CO2-level noise, but it’s not enough to spoil a little backyard fun. And you won’t upset the neighbors with “bangs” as long as you’re safe. The reciprocating slide action not only resets the trigger for the next shot but adds a bit of centerfire realism too. I wouldn’t describe the recoil as bone crushing, but the gun does move, so it’s a more mellow way to work on your grip and trigger technique.

Next on the list was setting up for 25-yard group testing to gauge accuracy. Not! That would be ridiculous—this is a BB pistol! It shoots minute of tin can at backyard distances with no problem. I’m sure it would do fine if I sandbagged it, but I was having too much fun with backyard action shooting. That’s all that matters to me for a pistol like this. But since we’re talking about aim, I should mention the sights. The rear is a low-profile squared notch flanked by two white dots. The front sight is an orange fiber-optic tube. The combination works—that orange dot up front leaps into view and the rear sight doesn’t add clutter to a clear and crisp sight picture.

This is a nifty air pistol. It’s plenty useful on its own for unadulterated fun but it also makes a great training tool. Want to teach a new shooter some pistol skills? Start here. Are you a guru looking for ways to hone your skills for pennies while shooting just about anywhere? This is your huckleberry. You can pick one up at Pyramyd Air for about $120.