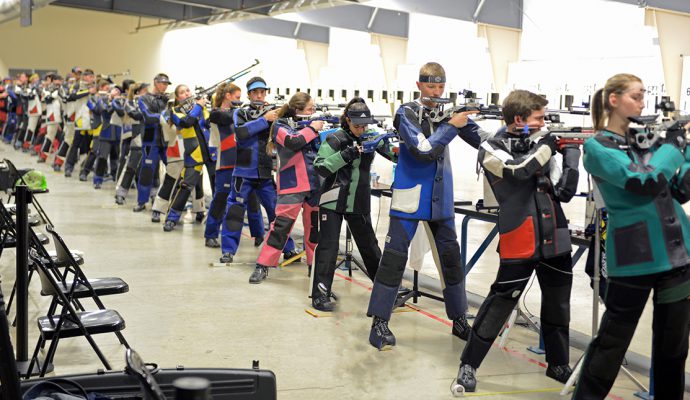 The National Three-Position Air Rifle Council has just released the new rulebook that will govern junior three-position air rifle shooting for the next two years. There aren’t a lot of significant rule changes in this edition, but the new rules recognize a couple of important new developments that promise to add renewed interest to junior three-position air rifle shooting. Those developments are a new authorization allowing Virtual EIC Matches and the introduction of Orion’s Athena electronic targets. An additional potential item of interest is Crosman’s plan to introduce a new Model 2021 Sporter air rifle during the coming year.

The National Three-Position Air Rifle Council was formed over 20 years ago by national youth-serving organizations that were conducting junior three-position air rifle shooting competitions. They wanted to establish one “national standard” rulebook to govern all of their competitions. The Council issued its first rulebook, the National Standard Three-Position Air Rifle Rules in 2000. The first rulebooks were issued annually, but after the rules stabilized, new rulebooks are now issued every two years. The most recent rulebook was the 2018-2020 rulebook, so the 2020-2022 13th Edition National Standard Three-Position Air Rifle Rules is due out this year.

Unfortunately, 2020 has not been a normal year. Covid-19 restrictions have severely impacted junior three-position air rifle shooting. Many school and club teams could not travel to competitions; some could not even meet to practice. All major Council member championships had to be cancelled. With so many curtailed events, a substantial inventory of 2018-2020 rulebooks remained. In addition, there have not been a lot of rule changes going into effect for the next competition season that has already begun this fall. As a result, a decision was made to continue using 2018-2020 rulebooks and to issue an Errata to go with those rulebooks that identify 2020-2022 changes. An electronic version of a fully-updated 13th Edition 2020-2022 National Standard Rules has also been prepared and posted on the CMP website at https://thecmp.org/youth/air/national-standard-three-position-air-rifle-rules/. Coaches, athletes and parents can download copies to print their own rulebooks or for uploading into their cell phones or tablets.

There are not a lot of changes in the 2020-2022 rules. The quickest way to see what those changes are is to download the Errata, which describes each of the changes. There are a few technical changes impacting clothing and equipment. There are some changes that authorize the use of features on Orion’s new Athena electronic targets in the conduct of matches. These features include red-green STOP-START signal lights mounted on each target, the display of Range Officer commands on each competitor’s monitor and a shot verification procedure that allows Match Officials to decide score protests or missing shot claims on the spot without having competitors fire provisional shots and wait until the end of the relay for decisions.

Virtual CMP Cup Matches. One of the most popular three-position air rifle program initiatives has been the Junior Distinguished Badge and the conduct of CMP Cup Matches where athletes can earn EIC (Excellence-in-Competition) credit points that count toward the 30 points needed for awarding the badge. Until now, all CMP Cup Matches have been shoulder-to-shoulder matches with multiple participating teams competing at one site. This obviously requires teams to travel but with covid restrictions many school teams are not allowed or are reluctant to travel. Several potential match sponsors have asked if it could be possible to conduct Virtual CMP Cup Matches where athletes would still have an opportunity to earn EIC points without having to travel to a match. Changes to the CMP Cup Match rules (see Annex D – Junior EIC Award Program) allow match sponsors to organize and sanction Virtual CMP Cup Matches where members of participating teams or clubs can fire 3×20 courses of fire on their home ranges. A uniform or central system of scoring must be used (Orion or a single scoring crew that scores all targets that are sent from participating sites). Virtual Match firing must be completed within a short timeframe (normally 8 days maximum). EIC points will be awarded based on combined results lists, with the limitation that individual athletes can earn a maximum of 10 EIC points in Virtual Cup Matches.

Piedra Vista High School Army JROTC in Farmington, New Mexico, successfully conducted a provisional Virtual 4 Corners Invitational in October. Match firing in this event took place at 23 different locations, with over 300 participating athletes. Three-Position Air Rifle program leaders who are interested in organizing Virtual CMP Cup Matches should check the regulations in the new rulebook that is posted on the CMP website and then contact CMP Staff at 3PAR@thecmp.org or 419-635-2141, ext. 702.

A breakthrough development in affordable electronic targets has been the introduction, this year, of the new Athena electronic target (Disclosure: Athena developer Erik Anderson is the author’s son). The Athena target offers electronic target scoring at about one-third the price of other electronic targets. Current Athena orders indicate that within the next year there will be several hundred of these targets being used to conduct three-position air rifle matches.

Athena targets (https://www.orionscoringsystem.com/orion/Home.aspx) with target, pellet trap, target lifter and competitor monitor are priced at $1,400 per firing point. Orion match management software can control an entire range of targets and operate display and leaderboard systems for spectators. These targets score by using visual image scoring algorithms developed and tested with the Orion Scoring System. The target has red-green signal lights on top of each target to show when firing is authorized or stopped. Competitor monitors provide images of shots and scores; the monitor also displays current range commands and information about firing status. A score verification feature allows Range Officers to instantly check shots questioned by athletes without the need to fire protest shots and wait until after the relay for rulings.

As the next three-position air rifle competition year is already getting under way, the authorization to conduct Virtual CMP Cup Matches will keep many teams and clubs active in competitions while they persevere through covid restrictions. And the availability of a new electronic target with innovative features promises to make shooting training and competitions on electronic targets a reality for more junior programs. These changes will contribute to the continued growth and a healthy future for junior three-position air rifle shooting.