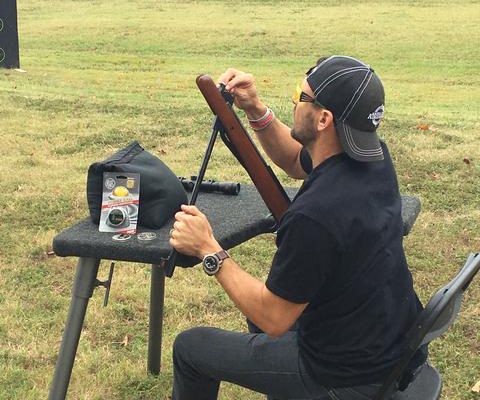 Today’s feature story is brought to you by Dave Higginbotham who writes for the Umarex USA blog. Shooting a break-barrel air rifle with top precision is indeed an art form consisting of part skill, part training, and part zen. Dave offers up some helpful tips to help you get the most out of your break barrel.

Break barrel air guns have an undeserved reputation for being finicky. The mechanics of the spring inside the frame create movement that can frustrate shooters who are new to the platform. That momentum shift, though, is easy enough to understand and doesn’t have to have a negative influence on accuracy, if you follow some simple steps.

First, let’s talk about the appeal of the break barrel. These guns, with proper care, will run indefinitely. They are exceptionally useful in the field, where they don’t require any pumps or air tanks to keep running. All you need is some old-fashioned arm strength and pellets and you’re good-to-go.

1. Use the right pellets.

Many guns have a preferred pellet. Different weights perform differently down range. Some pellet shapes work better than others. There’s no good way to generalize how to select the right pellet, though I would suggest starting with a quality brand, like RWS—they even sell a sample pack to keep the cost down.

2. Give the gun a break-in period.

The tremendous forces at work inside a break barrel rifle or pistol will shake things up. While most guns are made to tight standards, a break-in period should be expected. For some guns, this is as little as 100 shots. Others may take more than 500. Take it plinking before you start measuring groups on paper. This will allow the action to settle-in, and it will get you familiar with the recoil impulse and trigger.

3. Make sure all screws on stock and scope are tight and check regularly.

While we’re on the subject of movement, I need to talk about regular maintenance. Keep your tool-kit handy. Screws have a tendency to shake and vibrate loose. Scope mounts that are tight at the start of a day at the range may not be so snug by the end. Check everything, and frequently during each trip to the range. Also, avoid the temptation to over-tighten or use thread locker on those screw.

4. Place the butt against your thigh for leverage.

Break barrel air rifles are often stiff. They require some muscle. In order to keep the parts in alignment, and make cocking efficient, I’d suggest placing the butt on your thigh. This will anchor the gun and prevent you from exerting force on the rifle in a way that might damage it.

In order to open the action, you will need some serious force. Some guns even need a bit of a pop toward the end of the barrel to break it open. That’s where you should grip the barrel, too, but make sure you aren’t grabbing the muzzle break. You don’t want to put your hand over the end of the barrel, you don’t want to run the risk of knocking loose any noise dampening devices, and you certainly want to avoid any impact or pressure on the front sight post.

6. Keep a firm grip on the barrel.

Keeping the gun on your thigh is a great way to stabilize the rifle while you cock it. You should also hold onto the barrel. Holding onto the barrel provides the obvious leverage needed to cock the rifle, but it allows you to control the movement of the barrel, too. That may seem obvious, but there’s a benefit. The barrel is the least stable when it is “broken.” To minimize wear, cock the barrel in one smooth motion, seat your pellet with your other hand, and close the action. That whole sequence should be completed with one hand firmly controlling the movement of the barrel. It is actually more fluid than it sounds. Additionally, by keeping a firm grip on the barrel with one hand you prevent any accidental release of the barrel.  If the trigger is pulled or the cocking stroke is not completed, that force will bend your barrel.  This is a costly mistake. Never take that hand off of the barrel while cocking!

This is a simple step, but one that’s often overlooked by novices. The pellet needs to be seated. If it isn’t, it will get marred when you close the action and that kills accuracy. Simply push it in far enough that you can’t feel any of the pellet protruding.

8. Know how the rifle likes to be held.

Every gun behaves differently with different ammunition. The same can be said for the actions themselves. One model may perform well when braced on a bag. Another may not. It is best to experiment with hand placement to see what provides you with the best results. Experiment with rests, too—just know that you should always avoid placing the gun on a rigid surface. Try sandbags, instead, or your forearm. If you prefer to shoot freehand, try placing your support hand just ahead of the trigger guard. That balance point allows the gun to move freely.

9. Don’t grip tightly or pull into your shoulder.

Break action air guns move more than most other models. Let them move. That energy from the compressed spring has to go somewhere. If you lock a gun down in a death grip, the energy will, inevitably, shift your pellet’s point of impact. Take care to aim, and then relax everything except your trigger finger. Hold through the recoil, but don’t feel compelled to choke it down.

The last rule is just as important for a pellet gun as it is for your golf swing. Maintain your form all the way through the shot. Those who flinch at recoil often begin to flinch in anticipation of the recoil. Focus on holding the gun steady through the shot. Try not to blink. Keep your eyes down range, stay down behind the rifle, and then pop up and check your target.

With a bit of attention to the basics, a break barrel air rifle will provide a lifetime of performance. They are efficient, powerful, and one of the most cost-effective ways to work on your marksmanship.

David Higginbotham is a writer and educator who lives in Arkansas. After years of writing and consulting in the firearms industry, he’s coming back to his roots with air guns.